Before Red Dead Online launched in November, developer Rockstar Games said it couldn’t guarantee that player progress and stats wouldn’t be wiped after the beta ended. The good news today is that Rockstar has confirmed that, at least right now, it has no plans to reset anything.

Back in November, Rockstar warned that it might have to reset player ranks and stats in Red Dead Redemption 2’s multiplayer mode. The developer pointed out that it is not uncommon for large-scale betas to reset ranks and player stats ahead of the full release. As one example, progress in the annual Call of Duty betas get wiped before launch. So it’s especially good news to hear now that Rockstar doesn’t plan to reset stats or rank for Red Dead Online after the beta. 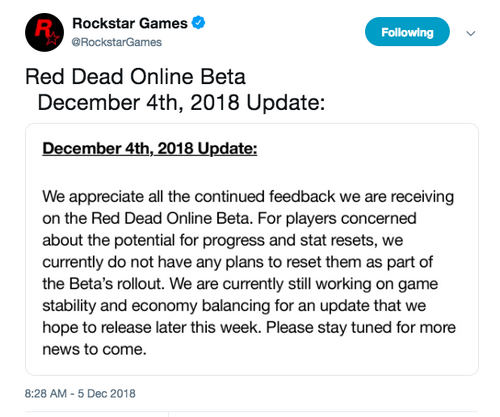 As Rockstar said earlier this week, it is hoping to release a new update for Red Dead Online this week to address general stability and the issues with the game’s economy balancing.
Red Dead Online, which is the free multiplayer mode for Red Dead Redemption 2 on PlayStation 4 and Xbox One, features new story missions set before the events of the single-player campaign that can be played solo or with others. It also features a variety of co-op and PvP modes, including Red Dead’s own battle royale mode.

Rockstar says to expect «lots more updates to the Red Dead Online beta in the coming weeks and months.» It hasn’t shared much about what to expect in terms of future updates to the game, though Grand Theft Auto V welcome numerous and significant updates over time.

Microtransactions are coming to Red Dead Online in the future, and players will be able to purchase the in-game currency gold with real money. Gold can also be earned by playing, and it’s used to buy certain weapons and other items, as well as a shortcut to lower your Honor level.