Fortnite Season 7 is now live, which means developer Epic Games has hit reset of the challenges and we’re starting anew. There’s a fresh Battle Pass to be purchased and it’s packed full of new cosmetics to unlock. To do that you’ll need to earn Battle Stars and level up the Battle Pass. The easiest way to do this is to complete the weekly challenges, and Season 7, Week 1’s are now available.

For its debut week, Season 7 asks players to pick up items of each rarity, dance in seven different forbidden locations, and play five matches with at least one elimination in each of them. Those are the free challenges available to everyone, but if you’ve spent money to get on the paid tier of the Battle Pass, you’ve got a selection of additional challenges.

In the paid Battle Pass challenge tier you’ll need to dance on top of a crown of RVs, with more stages of that specific challenge opening up after you’ve done that. Other challenges in that grouping ask the player to do 500 points of headshot damage, eliminate opponents in five different named locations, and search five ammo boxes in a single match. That final challenge is another multi-stager, so additional step will become available once the ammo boxes are searched. You can take a look at the full challenge list below. 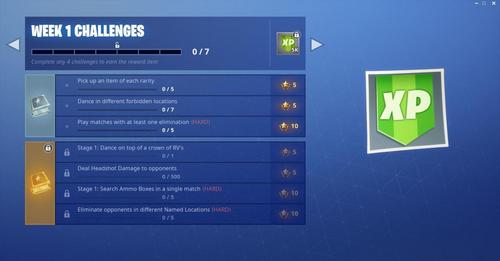 Epic Games has detailed everything that is new and has changed in its Fortnite Season 7 patch notes. Naturally, a big event ushers in the start of a new season, and this time an iceberg has smashed into the island. As a result, there’s new frosty areas and everyone is wrapping up to stay warm (that means there’s cool new wintery skins).