Kingdom Hearts 3 is set to conclude the Dark Seeker saga, a story that began with the original Kingdom Hearts way back in 2002. Kingdom Hearts 2, the last numbered entry, came in 2005. Over the past 13 years, the series has seen numerous spin-offs across multiple console and handheld generations, and the story has only gotten bigger and more complicated. Kingdom Hearts 3 has the unenviable task of wrapping up 16 years of lore, and for that reason, I cannot wait to play it.
This will be the first time our Avengers-esque team of heroes is fully assembled. Childhood friends Sora, Riku, and Kairi; Keyblade trainees Aqua, Terra, and Ventus; and even Mickey Mouse himself are gathering for a final battle against Xehanort. And if those names mean nothing to you, you can see why over a decade of games has made the lore a bit convoluted. 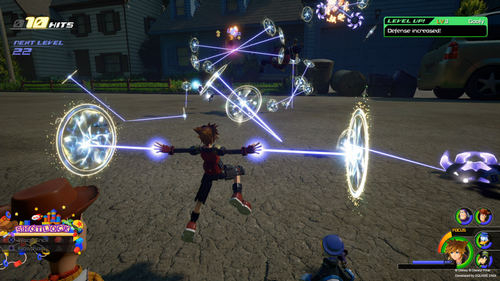 It’s not just the conclusion of a story that has me excited for Kingdom Hearts 3, though. We’ll be revisiting fan-favorite Disney worlds like Pirates of the Caribbean’s Port Royale and Winnie the Pooh’s 100 Acre Wood, and we’ll also be exploring a host of never-before-seen levels. We’ve seen worlds inspired by Frozen, Tangled, Toy Story, Big Hero 6, and Monsters Inc., and each one gives our heroes a new look and set of special attacks.

Speaking of which, combat has a few new hooks in Kingdom Hearts 3 as well. You can run up walls a la Dream Drop Distance, and Sora can even summon Disney theme park rides like Thunder Mountain Railroad and the Spinning Tea Cups to deal heavy damage to the Heartless horde. This is on top of unique weapon transformations based on the Disney world you’re currently in. I’ve enjoyed Kingdom Hearts’ fusion of real-time combat and menu-based spellcasting in the past, and based on my time playing the Toy Story and Hercules stages at E3 2018, I’ll add that it feels better than ever.

That show was the last time we went hands-on with Kingdom Hearts 3, but we’ll get a chance to experience the whole adventure on PS4 and Xbox One on January 29, 2019. If it’s the complete saga you’re after, you can grab Kingdom Hearts: The Story So Far and experience the entire franchise. And if you’d rather spend far less time getting hyped for the new one, you can enjoy the game’s opening song, courtesy of Skrillex and the returning Utada Hikaru.