Season 5 has started in Destiny 2, and while there’s a lot of new stuff on the horizon with the launch of The Black Armory expansion on December 4, there’s also plenty of weekly content to do in the meantime. As usual, the Spider has a fresh slate of bounties for players to clear out, and this week’s major adversary is the Vex minotaur known as the Arcadian Chord.

As usual, to get the bounty, you’ll need to venture to the Tangled Shore and gather five Ghost Fragments to purchase it. You can get those by completing the Spider’s Tangled Shore bounties, patrols, and public events. Once you buy the bounty, it’ll open up an Adventure on one of the planet’s in the solar system, near the Lost Sector where your target resides. 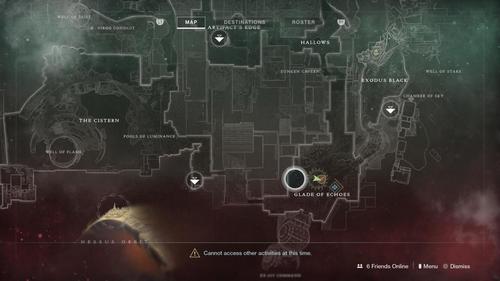 The Arcadian Chord can be found on Nessus, in the Glade of Echoes. He’s located in the Lost Sector known as The Carrion Pit, but you’ll see the Adventure marker as you approach to give you the exact location.

The battle itself is pretty difficult, as Wanted bounties go. The Arcadian Chord is protected by a personal shield that makes him tough to take down, and smaller minion enemies-including the exploding Vex Fanatics-will continually spawn around him to protect him. To take him out, you’ll need to protect yourself from his troops while searching for the means of knocking out his shield. 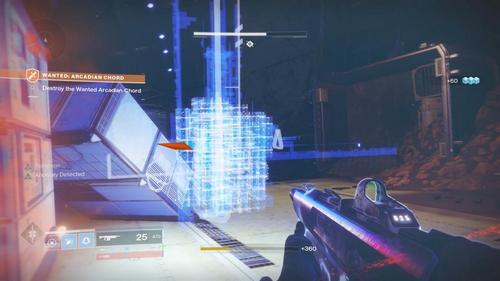 That shield is created by two blue Anomaly objects that appear on the battlefield while you’re fighting (for Destiny 1 players, these are the Oracles you saw in the Vault of Glass). The trouble with these anomalies is they usually spawn in hard-to-spot locations, like above you and behind objects. Run around the battlefield and blast the anomalies in order to open up the Arcadian Chord to damage, so blast away at him as soon as you get the chance-but be careful not to let any Fanatics sneak up on you.

You’ll go through this cycle three times. On the third repetition, you’ll have to find three anomalies to bring down the shield, instead of just two. Check under the platform where the Arcadian Chord hangs out, as you’re likely to find one hidden among the detritus there. When the Chord is down, you’ll be free to turn in the bounty and claim your Powerful gear, which is capable of raising your overall Power level.

While you won’t be able to rise above a Power level of 600 this week, that’ll change with the release of The Black Armory on December 4. It raises the cap to 650, and includes new activities and a new Raid. There are also five new Exotics coming with the expansion. Meanwhile, start of Season 5 brings new cosmetic items to the Eververse store, which you can check out right now. With the details about The Black Armory, we also got information about Bungie’s plans for the rest of Year 2. Finally, Bungie dropped a big update on Destiny 2 today that makes a number of small changes; read the patch notes right here

Spyro Steals No. 1 From Red Dead Redemption 2 And Fallout 76