I’ve been a bit of a slow convert to From Software’s work throughout the years. While I’m still learning to love Dark Souls, Bloodborne remains an all-time favorite of mine and the first (and only) game from the studio that I ever beat. Its moody gothic setting and speedy tactical combat resonated with me more than the slower, more defensive Dark Souls. But it seems the studio’s latest, Sekiro: Shadows Die Twice, just might dethrone Bloodborne for me in 2019.

I won’t lie to you, I’m a big fan of feudal Japan as a setting, so you can imagine why the mere sight of Sekiro has me excited. I can’t wait to experience From Software’s fantastical interpretation of Sengoku-era Japan, as well as see how it chooses to reimagine both history and myth. In addition, the premise of playing as a nameless shinobi with a weaponized prosthetic arm seeking to save his lord and get revenge appeals to me in its resemblance to ancient Japanese myths and legends.

Similar to Dark Souls and Bloodborne, Sekiro challenges you to make repeated runs through dungeons packed with fierce enemies and hidden traps. But what I find alluring about Sekiro is how it appears familiar but totally reevaluates all the mechanics you generally associate with From Software games. Absent are many of the RPG elements you’d expect, such as character creation, classes, and equipment upgrades. Instead, Sekiro is an entirely new experience set apart from the studio’s previous work that emphasizes action, stealth, and platforming.

It’s thrilling to see your progotanist use a grappling hook to string together acrobatic jumps from one ledge to the next. The emphasis on split-second attack deflection and hit-and-run assaults in combat is refreshing and exciting. Sneaking around and stabbing foes while their guard is down provides variety to your modes of attack. And then there’s the new resurrection mechanic where you can purposefully die to trick enemies, and return when their backs are turned to inflict a lethal surprise strike. There’s a bold confidence in the new mechanics From Software introduces in Sekiro, displaying a willingness from the studio to step away from its near-decade-old Soulsborne formula. 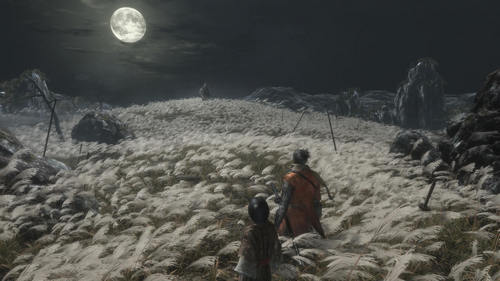 Not much more has been revealed about Sekiro since its most recent showcase at Tokyo Game Show 2018. One of the most notable news stories to come out about the project was the fact that it started life as a Tenchu game, From Software’s long-dormant stealth-action ninja series. This fact alone was more than enough to seal my interest in Sekiro, as I have many fond memories playing Tenchu in the early 2000s. Regardless, more news is bound to come in the new year-likely once we get closer to the game’s March 22 launch.

For a brief rundown on everything there is to know about Sekiro, be sure to read our feature highlighting all the essential details.