Nintendo entered 2018 riding a wave of momentum following the successful launch of the Switch. The hybrid console hit the market in March 2017 and quickly became one of the fastest-selling systems in the company’s history, thanks in large part to a steady stream of major exclusives such as The Legend of Zelda: Breath of the Wild, Mario Kart 8 Deluxe, and Super Mario Odyssey. Whereas Nintendo’s focus in 2017 was on establishing its new platform, its goal this year was to sustain the impressive momentum it had built, and it did so by releasing another solid string of exclusives for the console, along with additional system features like cloud saves and the Nintendo Switch Online subscription service.

But while 2018 was generally another strong year for the company, it certainly wasn’t without its missteps. Despite keeping up a regular release schedule, Switch hardware sales dipped compared to the console’s debut year, and new ventures like Nintendo Labo, a line of games bundled with DIY cardboard peripherals, were met with very modest commercial success-certainly not in the league of Wii Fit or any of Nintendo’s other mass market breakthroughs on the Wii and DS. With 2018 coming to a close, let’s take a look back at how the Switch fared during its sophomore year.

A Solid Year of Game Releases, Despite No Clear System-Seller

Since the Switch launched, Nintendo has released at least one notable first-party game for the console nearly every month, and that trend continued throughout 2018. While none of this year’s releases thus far were quite on the level of Breath of the Wild or Super Mario Odyssey, the system still saw a handful of well-received exclusives in Kirby Star Allies, Mario Tennis Aces, Octopath Traveler, Super Mario Party, and Pokemon: Let’s Go Pikachu and Eevee, while its biggest release of the year-Super Smash Bros. Ultimate-arrives on December 7.

With fewer original games lined up for the console this year than in 2017, Nintendo relied a little more heavily on Wii U ports to buoy the Switch during its quieter months, and that undoubtedly was reflected in slower hardware sales compared to last year. Still, software sales remained impressive, and this year’s spate of re-releases included some of Wii U’s finest games. Donkey Kong Country: Tropical Freeze arrived on Switch four years after it first launched on Wii U and has since become one of Nintendo’s best-selling games on the console. Bayonetta 2, Captain Toad: Treasure Tracker, and Hyrule Warriors: Definitive Edition all released for Switch as well, giving them another chance to shine on the newer hardware.

A few of Nintendo’s biggest titles from 2017 also received substantial new pieces of content this year, further bolstering Switch’s library. Splatoon 2’s first paid DLC, the Octo Expansion, arrived in June and added 80 new single-player-focused challenges to the game, while Xenoblade Chronicles 2’s expansive prequel story, Torna – The Golden Country, launched in September, both as part of the game’s expansion pass and as a standalone release. Nintendo also rolled out a steady stream of free updates for both Kirby Star Allies and Mario Tennis Aces in the months following their release, introducing new characters, gameplay modes, and other content to extend their longevity. 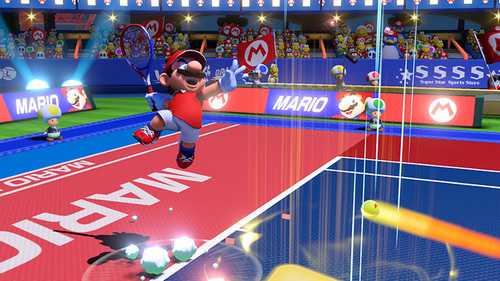 Moreover, Nintendo continued to make inroads in courting more third-party and indie support. While the company has traditionally struggled to attract other developers to its platforms, this year saw a number of major third-party titles arrive on Switch. Epic’s phenomenally popular battle royale game, Fortnite, released for the console in June and has since been downloaded on «nearly half» of all Switch systems worldwide, but it was far from the only notable third-party game to hit the platform. Mature titles like Wolfenstein II: The New Colossus, Dark Souls Remastered, Warframe, and Diablo III: Eternal Edition all also launched in 2018; the latter is particularly notable as it marked the first Blizzard game to come to a Nintendo console in nearly two decades.

Likewise, indies continued to thrive on Switch, and this year saw the release of Celeste, Dead Cells, Into the Breach, Hollow Knight, and other critically acclaimed gems. Despite the lack of a Breath of the Wild-calibur system-seller, 2018 proved to be another all-around good year for Switch software.

After several delays, Nintendo finally rolled out its paid online subscription service for Switch in September 2018. While online features were free on the console up until then, Switch owners are now required to subscribe to the service in order to play games such as Splatoon 2, Mario Kart 8 Deluxe, and Super Smash Bros. Ultimate online with other players. Subscribers also receive a number of other benefits as part of the service, including access to cloud saves, special offers through Nintendo’s website, and a library of classic NES games on Switch, all of which now support some form of online play.

Given that the service only recently launched, it’s still fairly early to pass a verdict on Nintendo Switch Online. That said, there are already some clear positive and negative aspects of the service. While it doesn’t seem to offer nearly as many perks as PlayStation Plus or Xbox Live Gold-both, for instance, give members a selection of free games every month, something that Nintendo’s service currently lacks-Nintendo Switch Online subscriptions are significantly cheaper than the competition. A yearly NSO membership runs for $20 (as opposed to $60 for PS Plus or Xbox Live), while an annual family plan costs $35 per year and can be shared between eight Nintendo Accounts across multiple systems. 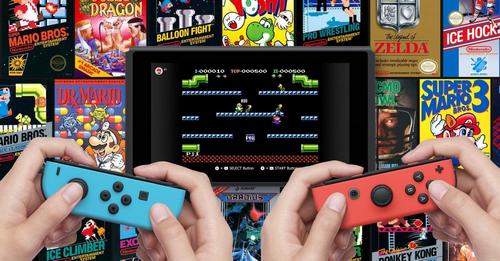 The included NES library is also a welcome benefit. While it certainly isn’t a replacement for the Virtual Console, having unlimited access to a selection of classic NES games as part of your subscription is more appealing than having to purchase the titles individually, as you had to on previous Nintendo consoles, and the addition of online play is a nice new feature. However, Nintendo has been slow in introducing additional NES games to the library; only three new titles have been added each month since the service launched, and it’s still missing some of the console’s most iconic games. On top of that, there is still no word on whether Nintendo will bring SNES, N64, or other legacy titles to Switch either through the NSO service or the Eshop, which remains frustrating.

Moreover, despite a subscription now being required to play Switch games online, the actual online experience isn’t appreciably different from when the service was free. Features such as voice chat are still handled through the separate NSO smartphone app rather than being built into the service-a confounding decision when Fortnite implemented native voice chat directly through the console. If it is able to, there seems to be no reason why other games couldn’t follow suit.

The aforementioned special offers through Nintendo’s website have potential to be worthwhile, but the two sole offers thus far are fairly disappointing. In addition to a set of free gear in Splatoon 2, NSO subscribers can order an exclusive pair of NES-style Joy-Cons. These resemble the classic NES gamepads and look quite neat, but they come with a few caveats that make them little more than a novelty. Overall, the Nintendo Switch Online service has room to grow, but its offerings thus far have been middling.

3DS Still Has Some Life Left

While Switch was naturally the focus of Nintendo’s attention in 2018, the company didn’t abandon the dual-screen 3DS line just yet. Despite being over seven years old at this point, the platform received a handful of notable releases over the past year, among them Detective Pikachu, the Pokemon spin-off that would inspire the upcoming live-action movie starring Ryan Reynolds. On top of that, this year also saw the release of WarioWare Gold, Radiant Historia: Perfect Chronology, Yo-kai Watch Blasters, and a remake of the GameCube classic Luigi’s Mansion.

It remains to be seen just how long Nintendo will continue to keep the 3DS line afloat, but it’s clear the company has plans to support the platform for the immediate future, with another batch of 3DS games on the way in 2019. In the first half of the year, Nintendo will release a remake of Mario & Luigi: Bowser’s Inside Story and Yo-kai Watch 3, while a port of the charming Wii platformer Kirby’s Epic Yarn is slated to arrive at some point in 2019. Atlus’s Etrian Odyssey Nexus, the final 3DS installment in the acclaimed dungeon crawling series, is also set to hit the handheld in the early part of the year, and there may yet be one or two surprise releases still in store for the platform before Nintendo finally ushers it into the sunset.

A Promising Look Ahead

Nintendo used its E3 2018 presentation to reveal a ton of new details about this year’s marquee Switch release, Super Smash Bros. Ultimate, but it also provided a tantalizing glimpse of what lays ahead for the system in 2019. Among other things, we got our first look at Fire Emblem: Three Houses, the upcoming Switch installment in the long-running strategy-RPG series, as well as surprise announcements like Daemon X Machina, a stylish new mech-action game from Armored Core veteran Kenichiro Tsukuda.

In the months that would follow, Nintendo would reveal additional titles coming to Switch in 2019, painting a very promising picture for the console’s future. Perhaps most notably, the company finally confirmed that an Animal Crossing game is indeed in development for Switch and is set for release next year. We also learned about Luigi’s Mansion 3 and got another look at the beautiful Yoshi’s Crafted World, which is now slated to arrive in Spring 2019. 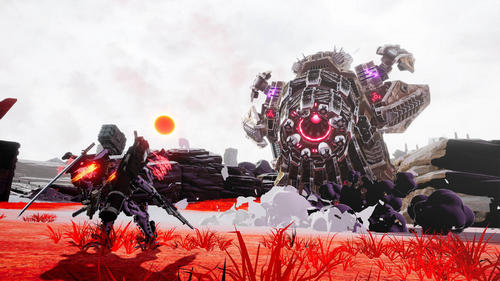 Additionally, The Pokemon Company reiterated that the previously announced «core» Pokemon RPG for Switch will release in 2019, and Pokemon developer Game Freak has another RPG in the works for the system tentatively titled Town, which is likewise slated to launch next year. There’s also New Super Mario Bros. U Deluxe, which releases in January and combines both New Super Mario Bros. U and its more challenging DLC expansion, New Super Luigi U, together into one package.

Taken together, it appears Nintendo has laid the groundwork for another year of steady Switch releases. There will likely be even more surprise games in store for the console throughout 2019, and that’s nothing to say of Metroid Prime 4 and Bayonetta 3, both of which Nintendo has publicly announced but not shared any details about just yet.

Between a handful of well-received exclusives, some big-name third-party releases, and Nintendo’s continued support for older games, the Switch had another solid software lineup in 2018, although the lack of a true heavy hitter like Breath of the Wild and Super Mario Odyssey resulted in slightly slower hardware sales this year. The long-delayed Nintendo Switch Online subscription service is also fairly weak in its current state, but it has the potential to grow as Nintendo rolls out more classic games and exclusive offers for subscribers.

After the disappointing performance of the Wii U, it seems Nintendo has struck on a winning formula with Switch, and the early glimpse we’ve gotten at the system’s 2019 lineup suggests its best days are still ahead of it. 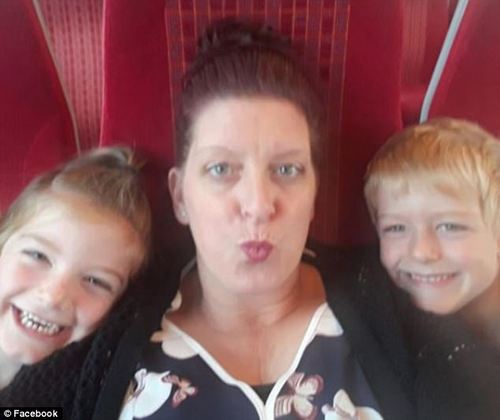