343 Industries has shared a new piece of concept art for the upcoming Halo game Halo Infinite. Revealed in a new Community Update, 343 says the art comes from a Halo Infinite reveal trailer that originally aired during E3 back in June.

What secrets does the image contain? Have a look for yourself-be sure to zoom in and enhance-and let us know in the comments below what you might have found. 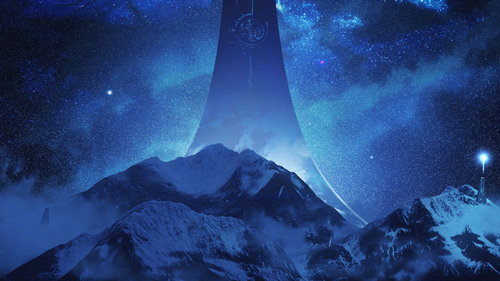 The Halo Infinite reveal trailer from E3 was actually for the game’s new engine, Slipspace, and not the game itself. The company has yet to show off the game itself yet, however, but we do know it is coming to both Xbox One and PC.

There is an intriguing rumour that claims Microsoft is planning to launch the game in two parts-first the single-player in 2019, with multiplayer coming in 2020. Microsoft hasn’t made any official announcements regarding release plans, however.

Halo Infinite places more of an emphasis on Master Chief, which is good to hear after Halo 5 controversially strayed away from him. It’s also apparently a very big game, as Halo franchise manager Frank O’Connor said the game will have «capacious» missions/levels.

No release date has been announced for Halo Infinite, but it’s one of our most anticipated upcoming Xbox One games for sure.