Epic Games has been introducing a new item or weapon to Fortnite on a near-weekly basis since the game’s Battle Royale mode became a global hit, and that trend will continue this week. Ahead of the title’s latest update, the developer is teasing the arrival of yet another new weapon: the Suppressed Sniper Rifle.

The gun is listed as «coming soon» in Fortnite’s in-game news feed, confirming it’ll arrive as part of this week’s content update. «Strike at your opponents quietly with this suppressed bolt-action Sniper,» the accompanying description reads. You can take a peek at the new weapon below. 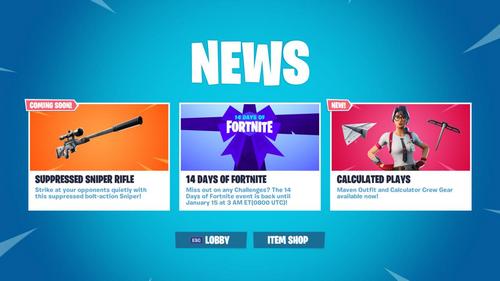 Players won’t have to wait too long to try out the Suppressed Sniper Rifle. Epic announced on Twitter that Fortnite’s next content update will roll out on all platforms-PS4, Xbox One, PC, Nintendo Switch, and mobile devices-on Tuesday, January 8 at 5 AM PT / 8 AM ET / 1 PM GMT.

The most recent item to come to Fortnite was the Boom Box, which arrived last week as part of the 7.10.2 update. Unlike most other items in the game, the Boom Box doesn’t deal damage directly to other players; rather, it functions as a counter for structures, sending out a blast of music that destroys those within its blast radius.

In other Fortnite news, Epic has extended the 14 Days of Fortnite holiday event, bringing it back on all platforms for another week to make up for the confusion surrounding its original end date. The event will be available until January 15, during which time all of its challenges will be available to complete. You can find the full list of challenges and tips on how to clear them in our 14 Days of Fortnite roundup.

Release Date, Closed Alpha, And What We Know (So Far)