A month after Red Dead Redemption 2 first released, its online multiplayer portion is now in beta. Red Dead Online borrows from both GTA Online as well as the multiplayer portions of the original Red Dead Redemption and incorporates RDR 2’s massive open world, with all its fine details and mechanics. But Red Dead Online lacks what made that vast, slow, meticulous world work, and as a result it leaves the weakest parts of it painfully exposed.

Red Dead Redemption 2-the single-player experience-is not concerned with your priorities. There are plenty of side distractions, and a few details will change here and there depending on your honor, but there are some missions you just can’t roleplay-you’re locked into one playstyle or one outcome. That can be frustrating in the moment, but it’s also a brilliant narrative device, one that gives you deeper insight into Arthur and his own struggle between what he wants to be and what he is. The fight against the game’s guiding hand is what gives the story its impact; you have to be a little tired of Red Dead Redemption 2 to fully appreciate what it’s trying to do narratively.

All that is to say Red Dead Redemption 2 is not what I’d call «fun.» In single-player, that’s a good thing. But in Red Dead Online, the things that don’t always feel good to play-the need to eat and sleep, the limited fast travel options, the often clumsy gunplay-have nothing to anchor them. There’s a small amount of story content at the moment, but nothing so engaging and personal as to give you a purpose in this world. The purpose, it seems, is either to kill or be killed, and frequently, though there doesn’t seem to be much of a reason to kill another player except to create chaos.

Currently, it’s difficult to achieve anything or get anywhere without being killed, disconnected from the server, or both. But even when you do get to play the game, it feels dated. Your character is understandably silent, and NPCs even acknowledge it, commenting often on your reticence. But the disconnect between your character and the rest of the world is pronounced. A solo mission given by Red Dead Redemption’s Bonnie MacFarlane, for example, involves a brief cutscene to give context, and then you’re tasked with the chore of locating and returning a cart of hers. When you return with the cart, there’s nothing-no cutscene, no acknowledgment from Bonnie at all. Just a pop-up with your slim reward.

Competitive multiplayer fares a little better. The snappy auto-aim is useful and gives some modes a looser, more fun feel, despite the clumsy gunplay, and getting headshots still takes skill. But movement is also clumsy, and it drags down the head-to-head modes. Accidentally ambling over rocks or struggling to mantle over a wall during a gunfight grinds everything to a halt, and the frustration is hard to shake.

Red Dead Redemption 2 as a whole is a lonely game filled with things to do. In single-player, riding alone through the plains and looking up at an enormous, open sky is powerful. In Red Dead Online, your emotional connection to the world and its inhabitants is missing entirely. There’s also a lack of content in general-you can wrap up the story missions in a number of hours, and after that, you’re left mainly to scrounge for money and wander aimlessly. In its current form, there’s nothing about Red Dead Online that makes me want to keep playing. It just makes me want to go back to Arthur’s story. 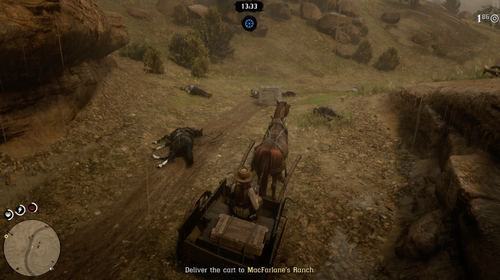 As much as I like Red Dead Redemption 2, I would be more compelled to play Red Dead Online if it shedded the single-player’s more belabored mechanics and opted for a faster, looser approach to the Wild West. The multiplayer experience would be better as a Western playground in earnest, rather than the blend of slow, solitary activities with potentially fun multiplayer chaos that it currently is. If GTA Online is any indication, there’s a lot of potential for Rockstar to iterate upon and expand Red Dead Online, both in the amount of content available and the nature of that content. But for now, I’ll stick with Arthur and the gang.