Microsoft has announced a really good deal on Xbox One hardware this holiday. Starting today, all Xbox One S and Xbox One X bundles are marked down by $100 in the US. 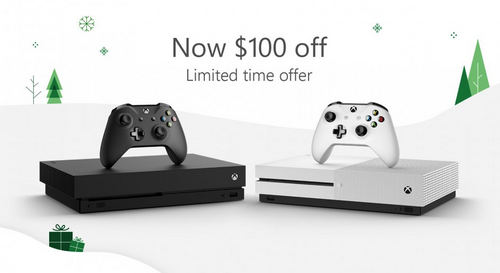 With the $100 off deal, you can get an Xbox One S in bundles that come with games like Fortnite, Minecraft, NBA 2K19, Battlefield V, Forza Horizon 4, and PUBG.

Of note, the Fortnite bundle comes with 2,000 V-Bucks to buy extra cosmetics with, along with the Eon cosmetic outfit right out of the box. The Battlefield V bundles come with the game’s Deluxe Edition, which gets you copies of Battlefield 1 and Battlefield 1943, as well as a one-month subscription to EA Access.

The Xbox One X has numerous bundles available going for $400. These include bundles that come with Battlefield V, Fallout 76, PUBG, Shadow of the Tomb Raider, Forza Horizon 4, and others. It is difficult to buy an Xbox One and not get a free game.

You can visit the Xbox website to see a full rundown of all the Xbox One S and Xbox One X bundles.

This is an aggressive pricing promotion from Microsoft, and it’ll be interesting to see if PlayStation follows with a PS4 deal of its own this holiday. Microsoft is in second place against Sony, and this price drop, though it is temporary, may help close the gap.