As you explore the wasteland of West Virginia in Fallout 76, you’ll often happen upon abandoned Power Armor. This high-level piece of equipment is a special armor that can be enhanced further with pieces of armor plating. These pieces are usually around level 40, so you can’t even use them until you’re leveled up. But don’t ignore Power Armor entirely because you’re a low level! Remove the pieces attached and take the Chassis left over, as even without the armor plates attached, you’ll get a bonus to your defense and a boost to your carrying capacity.

It’s also worth noting that once you hop into a Power Armor chassis, it’s yours for good just as long as you store it in your inventory or place it in your Stash. You’ll want to start compiling Power Armor pieces early on so that you can be prepared to use them when you reach the appropriate level.

Power Armor is such a boon to your stats both early and later on, so it’s well worth taking the time to seek them out. That and the Fusion Cores they often have on them are a valuable asset! To help secure you a set, we’ve gathered below Power Armor locations that are nearby Vault 76 and easy to get early on. It’s worth noting that while these locations are set, sometimes there won’t be Power Armor. This is because the game’s world is persistent, so if a player has picked up that armor recently, that means it’ll be gone. Lucky for you, a Power Armor set does respawn after a while. Remain steadfast and you’ll grab one for yourself in due time!

Be sure to check back often as we highlight more easy-to-find Power Armor sets. If you’re looking for more Fallout 76 guides, check out our survival guide, as well as our guide offering tips you should know before starting. You can also check out our feature showcasing all the Perk Cards we’ve found so far. If you’re more curious about how the game is, read our Fallout 76 review.

This set should be the first one you check for if you’re keen on grabbing some Power Armor right away. It’s located east of Vault 76; you’ll see an area that looks like a train yard on the map. You can find the Power Armor in a warehouse located south of Portside Pub, which is a smidge westof Mama Dolce’s Processing Plant. Refer to the map screenshot below for the exact location. 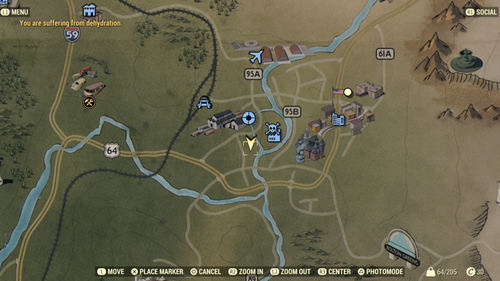 This warehouse is booby trapped, so you’re going to want to be careful in your approach. Fortunately, you can take a staircase to enter the building from the roof to avoid most of the danger. Simply head up the stairs, making sure to steer clear of the explosives traps as they’ll likely trigger as you pass through. Once you’re inside the warehouse, drop down to find the Power Armor. If you need more visual direction, refer to the screenshots in the gallery above.

The Morgantown Trainyard is just northwest of Portside Pub at the point on the map that appears as, well, you guessed it: a train yard. This Power Armor set is another one of the easier ones to grab, so you’re more than likely to show up and find nothing. But don’t give up! 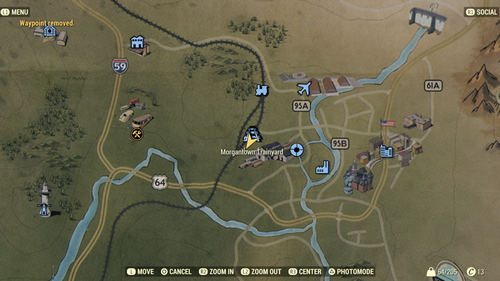 When you arrive to the train yard, look out for a train carriage labeled as «USA Star.» There are a couple in the yard, but the one you want is located just below a rusty crane nearby the east side of the main warehouse. The Power Armor suit is inside the carriage to your left.

This next Power Armor is at the Gorge Junkyard, which is directly east of Vault 76. If you’ve just started, you’ll want to put off getting this set, as it requires a level 3 lock-picking skill. If you want to up your ability to open those pesky locks, try putting points into Perception as much as possible, and if luck is on your side, you’ll receive a few Picklock Perk cards, which should get you to where you want to be. 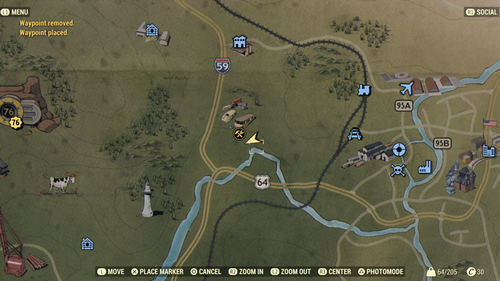 Once you meet these requirements, head to the junkyard and find a green truck trailer amid the junk for the Power Armor. It should be south of the red beached ship on the northern side of the yard near a tiny shack. Refer to the map above for an estimate of where it is, as well as the shots in the gallery for a more visual look.

This Power Armor location has a more lenient lock to pick coming in at a lowly Level 1-that said, it still requires you to have better lock-picking skill than zero, so don’t go here unless you’ve leveled that up! Anyway, this location is a bit further out at the Aaronholt Homestead, which is located northeast of the ferris wheel on the map. 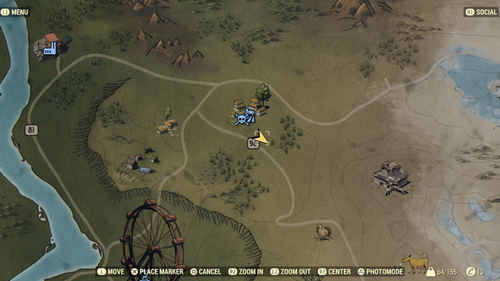 You’ll find the set tucked away in a shack beside the three large silos. Be wary of the giant bugs in the area, as they’re likely to be a nuisance to you if left unattended when you pick the lock.