Last week, Obsidian Entertainment announced their new sci-fi RPG, The Outer Worlds, at The Video Game Awards with a trailer reveal that the gaming world eagerly ate up. With anticipation high, the developer has shared even more details about the game, forgoing the typical industry caginess that tends to follow such big reveals.

Over the past several days, gameplay details and extra screenshots have hit Steam under the game’s official listing, RPG Site interviewed Megan Starks (Obsidian’s senior narrative designer), and Timothy Cain made a bold but concise proclamation to quiet fan fears.

Steam Gets a New Listing – and Screenshots 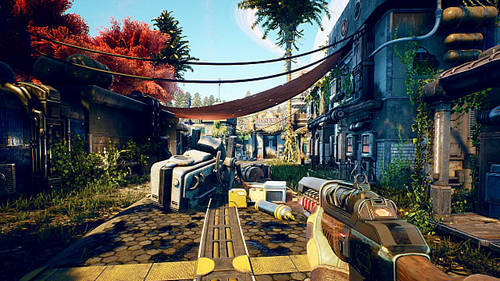 We already know the bare basics from the original trailer shown at The Game Awards: The Outer Worlds is a single-player, first-person sci-fi RPG steeped in space politics, conspiracy, and power struggles. What’s more, the trailer’s dialogue further emphasizes choice and player agency, right down to who you shoot in the face and who is spared that tragic indignity.

The Outer Worlds‘ Steam listing confirms all of this while also adding some storytelling context to the events of the trailer. The player, a lost colonist formerly on their way to the colony of Halcyon, is pulled out of hibernation to jumpstart your journey. Fun fact, Halcyon sits at the furthest edges of the galaxy. (We mentioned sci-fi, right?)

Among minor gameplay and story details, The Outer Worlds‘ listing provides hints regarding features such as multiple endings, a natural consequence of such a choice-based open world.

Key Features in a Vibrant World

The new Steam listing also delves into the game’s «flaw» system, which exists for the sake of well-rounded character development. Despite the name, flaws can be good and act as a direct gameplay mechanic.

While playing The Outer Worlds, the game tracks your experience to find what you aren’t particularly good at. Keep getting attacked by Raptidons? Taking the Raptiphobia flaw gives you a debuff when confronting the vicious creatures, but rewards you with an additional character perk immediately.

For a game so quickly compared to Fallout and Fallout: New Vegas, this freshly conceived system sets The Outer Worlds apart from its Obsidian predecessors. It promises to add an extra layer of not only strategy but immediate consequence and reward.

This facet takes Fallout’s perks a step further, perhaps to purposely set the new title on its own playing field while exploring one of Tim Cain’s core ideas (which we’ll discuss further later on).

Your strategy won’t end at flaw management. Various characters across the Halcyon colony can join your crew. Your new companions come with unique abilities, individualized side missions, and fully-formed motivations and ideals.

Alien monsters, such as the lovely Raptidons mentioned above, add an extra challenge to the otherwise corporate-controlled colony in which you find yourself. And as you would expect, exploring Halcyon leaves a lot of ground to cover. Just as the name suggests, The Outer Worlds (plural, of course) will send you gallivanting through surrounding settlements and space stations.

Note: There aren’t any descriptions of Raptidons or other aliens yet, so perhaps the only specific name we have refers to the creatures seen in the game trailer. 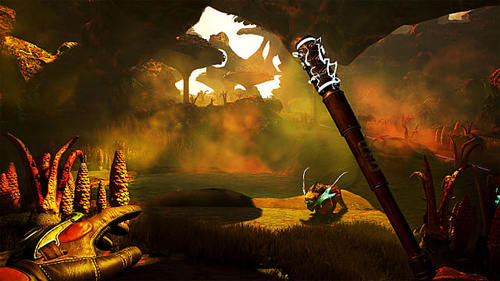 An Interview with Megan Starks

Starks’ resume marks her as both an experienced narrative designer and game designer. She’s worked on MMOs and fantasy RPGs alike, including Pillars of Eternity II: Deadfire, Tyranny, Wildstar, and Fallen Earth. 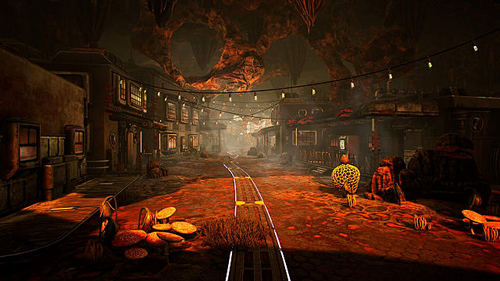 We want our companions to really emphasize that they have stakes that are important to them. They’ll ask you to help out on their quests and they’ll speak out against you if they don’t support what you’re doing, we want their motivations and goals to always be at the center of their character.

To further clarify, companions can and will ditch you for certain actions in The Outer Worlds. While this NPC reactivity doesn’t appear in every Obsidian RPG, it certainly won’t be new to Fallout fans.

It will be interesting to see if siding with one faction over another, for example, is enough to scare off some of The Outer Worlds companions, or if it will take the building of more specific actions over time to send them running, like in Fallout.

While the trailer already showed off some lively voice-acting, the player character will not be voiced. Starks explains, «… we didn’t want to force a character, or even a voice, onto players». 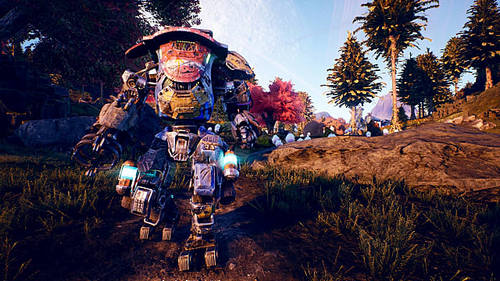 New details didn’t stop there, however. Starks made various comments that shed light on some of what we can expect from gameplay mechanics. 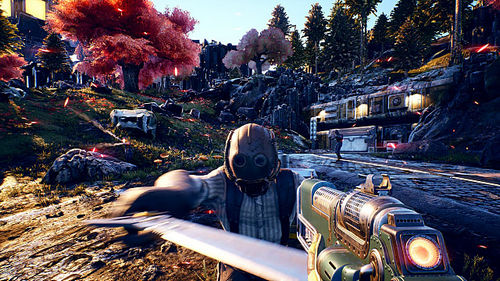 A Shining Promise in a Sea of Loot Boxes

One of the original creators of Fallout, Timothy Cain, reiterated Obsidian’s year-old promise to GameStar this week, declaring:

There are no microtransactions in the game. You buy it once and then enjoy it forever.»

And we’ll end on that very positive note. No loot boxes. No micros.

The Outer Worlds will release on Xbox One, Playstation 4, and PC in 2019.

Will the creators of Fallout outsell themselves and fan expectations? Share your thoughts, your hopes and dreams, and your fears in the comments below. We’ve got some time to kill, after all.