Recently, Tencent Games, developers of battle royale game, Ring of Elysium have released teaser trailers for an upcoming new game mode. The new mode titled From Dusk Till Dawn is aimed to kick up the “arctic survival” aspect of Ring of Elysium with the addition of the body temperature system, which will task players with keeping up their body temperature throughout the match. From Dusk Till Dawn will have players battling it out in the dead of night. 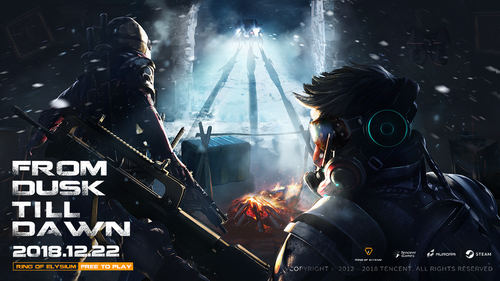 In a standard Ring of Elysium match, up to four players are counted as being winners if they succeed in making it to the rescue helicopter. In the upcoming From Dusk Till Dawn mode, the rescue helicopter has left and won’t be back until morning, leaving players to survive a night during Dione’s worst season and harshest weather conditions. In order to survive, players will have to fight it out for valuable resources such as food, heat and of course, weapons.

Much like a standard match, From Dusk Till Dawn will also have multiple winners, however, this time, any players that survive the night cycle and make it until morning will be counted as winners in the match. This means that players queuing up in a group will be able to share the glory and may want to pool their resources rather than keeping them all to themselves in order to achieve survival. Each day, the new game mode will be available to players for a limited time.

From Dusk Till Dawn will be hitting Ring of Elysium on December 22nd, here’s a peek at what players can expect to contend with if they intend on taking on a night on Dione.

Ring of Elysium already includes a dynamic weather system that shifts throughout each match, which includes things like avalanches and extreme freezing conditions causing players to be inflicted with hypothermia or worse-completely wiped out by an oncoming avalanche! Weather will play an even bigger part in From Dusk Till Dawn, as players face a full cycle of varying thermal conditions. Throughout a Dusk Till Dawn match, players will have to contend with light snow, heavy snow and extreme cold. The latter two, especially extreme cold, will affect players the most doing high amounts of damage to their body temperature as well as HP.

The new body temperature system will function separately but alongside a player’s HP. While standard items to regain HP such as bandages and medical cases will still remain, players will have to keep up their body temperature if they want to survive the match without freezing or bleeding out. The lower a player’s body temperature the faster the blood loss.

In order to stave off the cold, players can create a bonfire which they’ll be able to do only once per match. Fuel such as additional firewood can be added to really get the fire roaring, but as Dione is a veritable frozen tundra you can guess it’ll be a pretty limited (and valuable) resource. Using fuel also extends the life of the fire making it last longer and also has the benefit of cooking food at a faster rate.

Food plays an important role in Dusk Till Dawn as players will need it to keep up their body temperature and recover health. New food items are being added such as energy bars which will provide small, temporary amounts of body temperature but the most valuable and useful items will be cooked food. Eating cooked meats will give players the biggest boost in body temp and functions similar to a large health potion. So, expect to do some cooking if you want to see the sunrise, especially during heavy snow and extreme cold weather cycles.

In order to help players plan out how they want to survive in the match, all resource locations will be shown on the map. What’s more is that the location of players will be revealed during certain times throughout the match, which creates the opportunity for some strategic gameplay. Camping resource locations with a group and keeping an eye out on the map for a reveal of the competition may be a good way to gain some additional supplies while taking out the competition.

Each match of From Dusk Till Dawn will last for a set amount of time. As previously mentioned getting through the match without freezing to death or bleeding out will lead to victory and anyone who manages to do so will get to see a new sunrise animation and be able to claim victory over the night of Dione and any players you took out along the way.

Whether you plan to team up and pool resources or go it alone, From Dusk Till Dawn will definitely create some new challenges and really bring the feel of “arctic survival”. Looking forward to From Dusk Till Dawn? You’ll be able to take on a frozen night on Dione beginning December 22nd. If you haven’t picked up Ring of Elysium yet, it’s available on Steam and is free to play.