It’s safe to say the Crash Bandicoot N. Sane Trilogy remaster was a success in the eyes of publisher Activision. But while fans enjoyed reliving their memories of the 32-bit platformers, many also wanted a similarly remade version of the 1999 kart racer starring every gamer’s favorite bandicoot. Their wishes have been granted: Crash Team Racing Nitro-Fueled is slated to release June 21 for PS4, Xbox One, and Nintendo Switch.

This version of the game is rebuilt from the asphalt up and includes everything that came in the original game, plus new karts and tracks. Also, the whole thing has modern graphics, online play, and new character- and kart-customization options.

If you’re ready to lock down a copy of Crash Team Racing Nitro-Fueled for yourself, you probably want to know about the pre-order bonuses, different editions, where it’s available, and how much it costs. Let’s dive into the specifics. 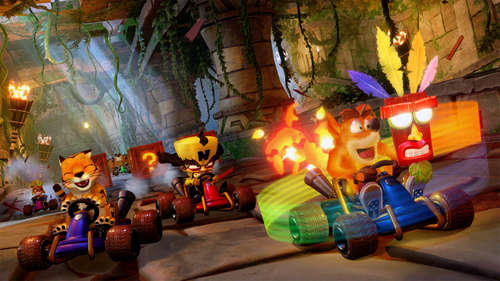 Pre-order from the Microsoft Store, and you’ll get a «bonus in-game item» (presumably to be announced later) and a Crash Head Xbox One avatar mask.

The standard edition doesn’t have any fancy collectibles or digital pack-ins, but the game is all you really need anyway.

No retailers have the Switch edition available for pre-order yet. We’ll add it here when it appears.

While you can unlock Nitros Oxide and his kart as in-game rewards from Adventure Mode in the standard edition, the digital-only Nitros Oxide Edition comes with them unlocked from the start. It also comes with a Nitros character skin and kart, as well as character skins for Crash, Coco, and Neo Cortex, plus «additional digital content to be announced later.» If that’s worth $20 extra to you, this is the edition you’ll want.

The 5 Best Nintendo Switch Games Of 2018