Razer has unveiled its newest wireless keyboard and mouse, which are specifically designed to work with Xbox One. Called Razer Turret, the mouse and keyboard set retails for $250 USD.

There’s nothing stopping you from using the Razer Turret on a PC, but the mouse and keyboard come with certain features that make it ideal for Xbox One. The Turret comes with both Razer Chroma and Xbox Dynamic Lighting, which pair up and cause the keyboard to light up in sync with the games you play. There’s also an Xbox dashboard key that allows you to immediately return to your console’s home page.

The wireless mouse and keyboard offer up to 40 hours of play on one charge, with the keyboard and mouse having a lifespan of 80 million keystrokes and 50 million clicks respectively. Part of the keyboard can also extend, providing a smooth surface for the mouse-which is stylized after Razer’s Mamba Wireless-so you can play with the Turret on your lap without a desk or a table if you prefer. 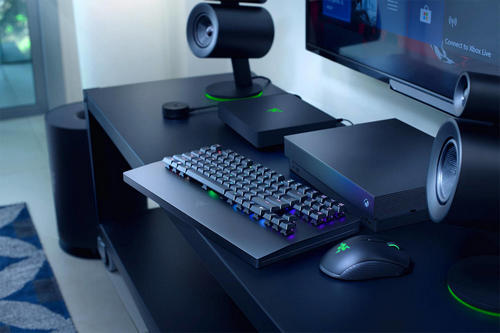 November’s Xbox One update added mouse and keyboard support to the console. However, support was not implemented for every game. The update simply adds the option, and developers can decide whether or not they want to implement the control scheme in their game when it comes to Xbox One. Fortnite, Warframe, and War Thunder were the first games to support mouse and keyboard controls on Xbox One with Minecraft, Bomber Crew, Deep Rock Galactic, Strange Brigade, Warhammer: Vermintide 2, and X-Morph: Defense following in late November. Children of Morta, DayZ, Minion Master, Moonlighter, Vigor, Warface, and Wargroove are scheduled to be updated with mouse and keyboard controls at a later date.

The Razer Turret is available for pre-order on the Microsoft Store, but it doesn’t have a definitive release date beyond Q1 2019. There’s currently a limited-time offer on the Turret where you net a $25 USD Xbox gift card with a pre-order.