At CES 2019, Samsung unveiled its new 75-inch MicroLED TV. Despite its size, this is actually the smallest MicroLED TV that supports 4K resolution. Even though both OLED and LCD technology are already pushing 8K resolution, CNET’s coverage of CES reports that Samsung plans on further developing its MicroLED technology so that it can rival the two older display types by the end of 2019.

Samsung first showcased this MicroLED TV technology at CES 2018, showcasing how the screens were composed of millions of individual LEDs. Individuals screens could be combined to create massive displays, which the company calls The Wall TV. Previously, the smallest size for The Wall-that could support 4K-was 146 inches. The company could go larger and still support 4K though, and it proved that this year with the reveal of a larger 219-inch version of The Wall too.

According to CNET, Samsung is taking advantage of the new-generation display’s thinner panels to make plans for selling MicroLED TVs to US consumers in 2019. The panels have previously been 80mm, which is more appropriate for industrial use. However, they’ve recently been shrunk down to 30mm. Samsung will announce the TVs’ release date and prices at a later time. 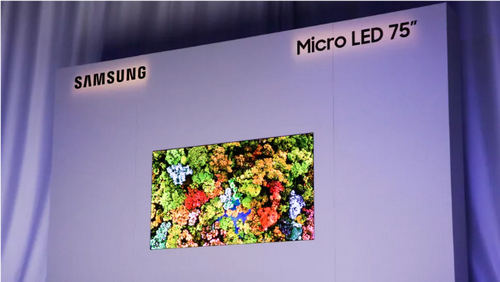 Just because Samsung plans on promoting MicroLED, does not mean the company plans on abandoning its OLED and LCD TVs. At CES 2019, Samsung revealed a new 98-inch 8K QLED resolution TV. Relying on 33 million pixels, the television is about the size of an average living room. For context, if you were to play Red Dead Redemption 2 on this TV, it would probably display a nearby horse close to a believable real-life size. No price has been announced for this TV either, but Samsung sold last year’s 85-inch 8K QLED TV for $15,000 USD, so you may want to expect at least that price.