Every Xbox One bundle is $50 off right now in the United States, and this includes the higher-power Xbox One X consoles and the Fortnite bundle, Microsoft has announced.

The discount goes even deeper if you just want a console. The Xbox One X, which normally sells for $500 USD, is now available at retailers for $400 USD. Microsoft does not appear to sell the Xbox One S in a non-bundle, but you can get that system starting at $250 in bundles that come with games like Fortnite, Minecraft, NBA 2K19, Battlefield V, Forza Horizon 4, and PUBG. 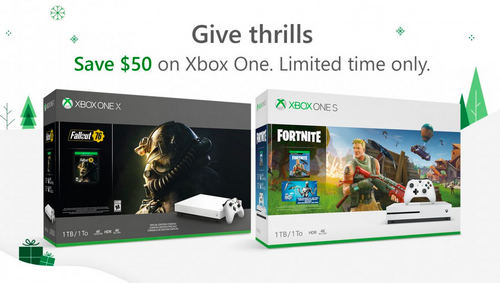 The Xbox One X, meanwhile, has numerous bundles available going for $450, including those that come with Battlefield V, Fallout 76, PUBG, Shadow of the Tomb Raider, Forza Horizon 4, and others. You can visit the Xbox website to see a full rundown of all the Xbox One S and Xbox One X bundles.

It’s not immediately clear when the Xbox One console and accessory deals will end, but Microsoft describes the offers as being available only for a limited time.

In the past, competitor Sony responded to Microsoft’s Xbox console deals with offers of its own, so it will be interesting to see if the company does so again this time.