The Academy of Interactive Arts & Sciences (AIAS) has announced that Bonnie Ross, a 24-year Microsoft veteran perhaps best known for her work on Halo, will be inducted into the group’s Hall of Fame. She joins an esteemed group of game developers, including 2017’s recipient, Bethesda’s Todd Howard, along with Mario creator Shigeru Miyamoto, Metal Gear designer Hideo Kojima, and Valve founder Gabe Newell, among others. Ross will be the first woman in the AIAS Hall of Fame. 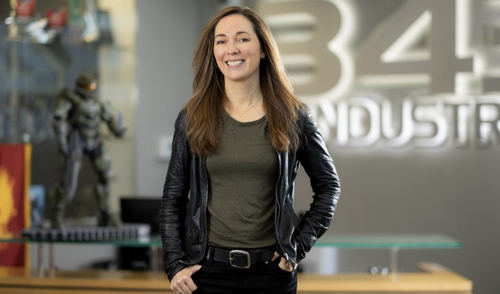 «It is thanks to Bonnie’s vision and drive for combining art and technology that has allowed the Halo universe to flourish within so many different mediums and platforms,» AIAS president Meggan Scavio said in a statement. «That along with her deep passion to expand diversity in gaming and encourage STEM education amongst women as well as all young people is truly inspirational. Her positive legacy and leadership have helped advance interactive entertainment and will impact game makers and aspiring game makers for generations to come.»

Xbox boss Phil Spencer will present Ross with the Hall of Fame award at the 22nd DICE Awards ceremony on February 13, 2019 in Las Vegas.

In his own statement, Spencer said it’s been a privilege to work with Ross for more than 20 years. «I have continually been impressed not only by her passion for merging art and storytelling, but also her equal passion for creating teams and technical breakthroughs; solid foundations that will set the direction of Halo and Xbox for years to come,» he said.

Ross joined Microsoft in 1994 and some of her first work in games was on Microsoft’s sports games for PC, beginning with NBA Full Court Press. She rose through the ranks and later held roles such as producer, lead producer, and executive producer, before becoming a general manager for Xbox where she oversaw pretty much everything from Microsoft Studios.

In 2007, her work on Halo expanded when Halo creator Bungie and Microsoft split off. Ross founded Microsoft’s new internal Halo team, 343 Industries, and today she holds the title of Microsoft Corporate Vice President and Head of 343 Industries.

Outside of the Halo series, Ross co-founded Microsoft’s Women in Gaming program that aims to help women get into science, technology, engineering, and math (STEM) careers.

Halo franchise manager Frank O’Connor wrote a nice blog post about Ross, and in it he talks about what makes Ross such a great person and professional colleague.

«To see Bonnie recognized for her career and her passion is gratifying, but even more so knowing that the recognition itself will inspire future creators, engineers and world-builder and continue the work and the mission she started on her first day at Microsoft,» he said. «On Legendary difficulty, obviously.»

The next Halo game, Halo Infinite, is currently in development for Xbox One and PC.