Where is Red Dead Redemption 2’s online mode? It should launch this week, if past statements hold true. Strauss Zelnick, the CEO of Rockstar Games parent company Take-Two Interactive, confirmed that the mode is launching «toward the end» of November.

Given that there are only five days left in the month, you can expect Red Dead Online to launch this week if Zelnick’s statement holds true. Officially, all Rockstar has said is that Red Dead Online will launch sometime in November, but that window is closing fast. 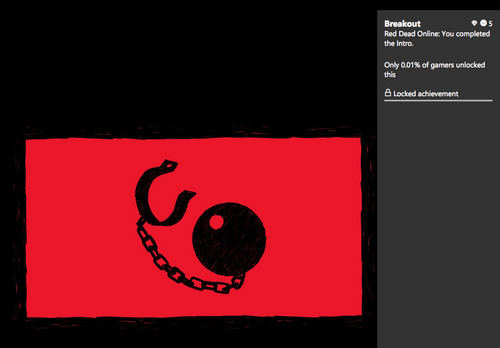 Red Dead Online will be released initially as a beta. Rockstar Games is expecting some hiccups and other teething problems, so you shouldn’t expect a completely smooth experience. As for what the mode actually entails, we’ve heard very little; you can read about what we hope to see in Red Dead Online. Rockstar summed it up this way:

«Using the gameplay of the upcoming Red Dead Redemption 2 as a foundation, Red Dead Online will be ready to be explored alone or with friends, and will also feature constant updates and adjustments to grow and evolve this experience for all players.»

The achievement «Breakout» is awarded after you complete the introduction of Red Dead Online, and right now, the Achievements list shows that 0.01 percent of players have unlocked it. The image for this Achievement is a ball and chain, couple with the title «Breakout,» suggests it will involve … breaking out of something.

Further to this, RockstarIntel discovered an image reportedly from Red Dead Online that shows the intro sequence for the mode, with characters locked in a jailcage on a wagon. So it appears the first mission in Red Dead Online is to break out, and then presumably all the character creation and other elements will follow. Rockstar has said pretty much nothing specific about Red Dead Online, but many more details should come soon.

For more on Red Dead Online, check out GameSpot’s roundup of 12 things we want to see in the multiplayer mode.

All The Winners Revealed Here Tonight