Things haven’t been going great for Bungie and Destiny 2 lately. First, the developer launched The Black Armory, its latest expansion, to much derision when players discovered the new content came in at a pretty high level, forcing them to grind through old content to become strong enough to try the new stuff. Then today, with the launch of its holiday-themed event, The Dawning, and the new items that go with it, Destiny 2 pretty much broke entirely as the game was swamped with connectivity errors.

As of this writing, Bungie has tweeted that it is working on the problem as relates to players receiving error codes WEASEL, CENTIPEDE, GUITAR and CHICKEN (although only Bungie actually knows what those mean). Bungie also wrote that it hopes to have the issue fixed by noon PST.

We are investigating an issue causing some Destiny 2 players to receive WEASEL, CHICKEN, and CENTIPEDE errors.

The errors mostly seem driven by connection drops with the Bungie servers. They’re making it impossible to load into areas of the game. Those who do manage to get on a planet or into the Tower are finding they’re constantly kicked out of the instance by short connection drops, only to be reloaded back at the area’s start. It’s all more or less rendering Destiny 2 unplayable right now. 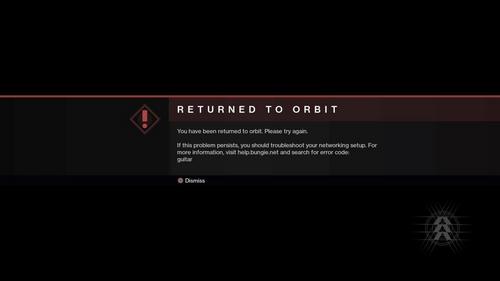 That’s a bummer, because the Dawning has some interesting new stuff to do. First and foremost is a big holiday-themed activity that’s about baking cookies for Destiny 2’s various characters, using ingredients gathered from the game world. There are new cosmetic items to earn through playing in the Dawning, which runs through the end of December, and the event marks the return of the Mayhem Crucible playlist, something we haven’t seen in the game since Destiny 1.

There’s also the Black Armory expansion, which has added some new activities and loot for players to chase. In response to criticism, Bungie lowered the level requirements for those activities to make them a bit more accessible to players, but you’ll still need to do some grinding to get strong enough to take on the Black Armory’s forges. The good news is that the guns they produce are generally pretty slick.

We’ll keep you posted as new information about fixes for Destiny 2 becomes available.