Wreck-It Ralph has now starred in two title roles all about hopping between different video game and internet properties, and some of that has made the transition into the real world. Fortnite streamers have spotted the character making a brief cameo in concert with the release of his second movie. 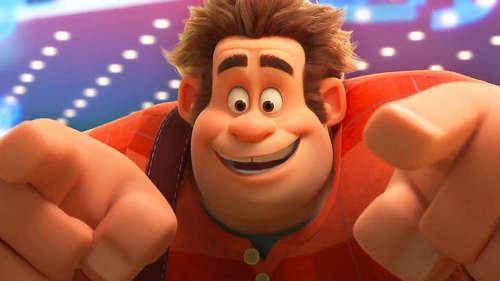 Fortnite streamer MozzzyyTwitch spotted Ralph on a movie screen in Risky Reels. The cameo is short-just Ralph walking on screen, waving, and walking away-but it has sparked speculation that something bigger may be in the cards. It could just be an Easter egg to promote the release of the new movie, of course, especially given that the appearance is on a movie screen.

Ralph is a natural fit for a video game cameo, based on the premise for the character. In the first movie Ralph is a dissatisfied classic arcade game villain who wants to be a hero and hops into different games looking for an opportunity to prove himself. In the new sequel, Ralph Breaks the Internet, he and his newfound buddy Vanellope go on a trip to the world wide web. As an online-only video game, Fortnite checks both boxes. Plus Risky Reels has been regularly used for quirky displays.

This wouldn’t be the first time Fortnite has included a popular character from a big-budget movie. Upon the release of Avengers: Infinity War the game temporarily added the film’s villain, Thanos, as a playable character. Predictably he was a little too powerful, and got nerfed almost immediately.

Free Steam PC Game For A Limited Time: Lego The Lord Of The Rings