Since Fallout 76‘s release in November, Bethesda has been hard at work attempting to correct the many problems that plague the company’s new multiplayer RPG. This has manifest in a series of patches that focus on performance improvements, bug fixes, and gameplay adjustments, and this week marks yet another one of these updates.

Releasing today for PC, and on Thursday for consoles, this new patch is loaded with small tweaks that will impact many areas of Fallout 76, from its graphics to its quests. However, the most exciting aspects of the update is its focus on C.A.M.P. improvements, character re-speccing, and a number of quality-of-life improvements for those playing on PC.

C.A.M.P.’s are Fallout 76‘s player-made bases, and they have been a point of much frustration since the game’s beginnings. While it is no problem for players to log out of the game without dismantling their C.A.M.P., if that player then logs into a server where their base’s location is already occupied, issues can occur. Specifically, the C.A.M.P. of the newly logged in player will be dismantled and, sometimes, completely lost.

Bethesda has addressed this issue with this new update, as players will now be notified if their C.A.M.P.’s location is taken. These players then have the opportunity to relocate their base, at no cost, or find a new server where the original location is available.

Furthermore, small obstructions found in the landscape (rocks, trees, etc.) will no longer prevent players from building C.A.M.P. items in their locations. Instead, these world objects will simply be removed if a player attempts to build upon them. 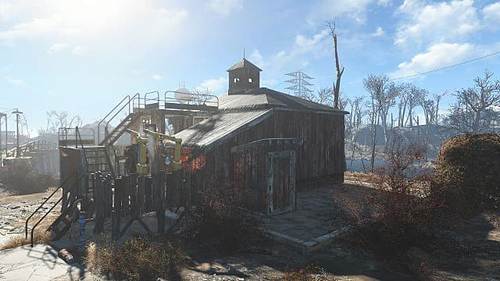 Beyond these critical adjustment to the C.A.M.P. system, players may be excited to find that they can re-spec their characters following this update. For each level a player attains past level 50, they will now be able to decide if they want to gain a new Perk Card or re-allocate a SPECIAL point.

While some players may feel that this is a less than ideal approach to character re-speccing, considering it cannot occur prior to what amounts to Fallout 76‘s end-game, this is certainly a step in the right direction. For many, the Perk Card and SPECIAL systems may feel opaque as they begin their time in Appalachia, and the ability to make adjustments later is a welcome and necessary change.

Finally, PC players will be happy to find some much requested features have been added. This includes a push-to-talk hotkey that prevents players’ microphones from always being active, a Field of View slider, and 21:9 resolution support.

Following last week’s update, Bethesda came under fire for what players perceived as a lack of transparency in the provided patch notes. It seems that the company has taken this criticism to heart, as the the aforementioned changes are just a small portion of what is outlined in today’s communication. With these frequent updates, it is clear that Bethesda is committed to improving the Fallout 76 experience, however, it remains to be seen if players will feel satisfied with the details provided this time around.

Full patch notes for today’s update can be found on Reddit.