Die-hard Destiny 2 players who log in for today’s weekly reset, and to chase down the new Izanami Forge, will have something nice waiting for them: a batch of in-game items called the Veteran of the Hunt bundle. It’s Bungie’s way of saying thank you to early adopters of the Forsaken expansion, something the developer announced back in October.

The Veteran of the Hunt bundle is free to everyone who played Forsaken between its launch on September 4 and October 16. The bundle includes two Exotic emotes-one which mimics Petra Venj’s knife-throwing animation, and another in which you do the Drifter’s coin-flip move. It also has an unique Veteran of the Hunt emblem (which has changed since Bungie first announced it), and a handful of consumables, including Fireteam Medallions, Finest Matterweaves (which cause Enhancement Cores to drop from bosses), and Crucible and Vanguard Boons. 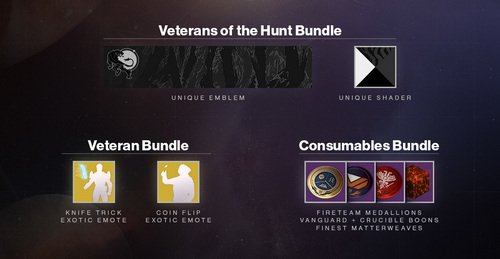 Bungie announced back in October that it was grouping Forsaken with Destiny 2’s two previous expansions, Curse of Osiris and Warmind. Some players struggled after returning to Destiny 2 for Forsaken, but having skipped the previous two smaller DLC offerings. That meant those players weren’t able to play the new content they’d paid for, since Forsaken requires the previous two installments as well.

As Bungie mentioned in its blog post, the Veteran of the Hunt bundle was a thank you to players who’d picked up Forsaken in that first month before Bungie made the change to how it sold its expansions. It took two months, but that thank you is finally here. If you’re eligible for the Veteran bundle, logging into Destiny 2 will give you a notification that Zavala has a gift for you.

The most recent weekly reset brings the third new Forge activity, which is part of Destiny 2’s latest expansion, The Black Armory. It also marks the second week of The Dawning, Destiny’s holiday event, which this year requires baking cookies and giving them as gifts to the game’s various characters. Check out our guide to cooking all the cookies and unlocking Dawning Cheer, a unique holiday-themed sparrow.