Season 7 of Fortnite is in full swing, and with it comes another 10 weeks’ worth of new challenges, weapons, items, skins, emotes, map changes, balance tweaks, and everything else in-between that Epic uses to keep Fortnite feeling fresh week after week. Right off the bat, the most significant of these changes appears to be the new snow-coated section of the map, which adds some festive and suitably chilly elements for this winter season. But the brand-new Creative mode, and the way it intertwines with the The Block to showcase community creations on the shared game map, might be Season 7’s most exciting new addition, and should take some of the pressure off Epic to pump out new content every single week. 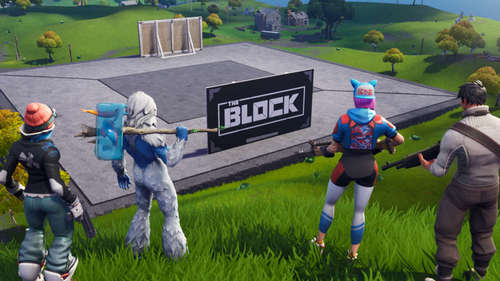 Fortnite is in a good place right now with the way its gameplay has been finely tuned, and this is born from a season of experimentation. In fairness, this has been true of most seasons, since Epic isn’t content to sit on its laurels even when Fortnite continues to be the most popular game in the world. Yet Season 6 was more experimental than usual. For starters, glider redeploy was added to the default game modes for a week or so to test its effect on the game before Epic, with the help of the community’s feedback, opted to remove it. While I enjoyed being able to flank people and bypass their fortresses by simply gliding over them, it did negatively impact the dynamic of most firefights. Fall damage was essentially removed, encouraging people to build as high as they could with no tangible repercussions, while healing or reviving squadmates became nigh on impossible due to the ease with which hostile players could traverse vast distances. Then there was the maligned addition of mounted turrets, a brief and confusing buff to explosive damage, a welcome buff to shotgun damage, numerous changes to the map as Kevin The Cube embarked upon his final journey, and the Fortnitemares Halloween event that shook up default game modes by introducing the calculated mayhem of AI zombies.

Fortnite’s strengths are built around this ever-changing environment that keeps the battle royale foundations feeling fresh. Being part of the zeitgeist is too enticing to ignore when there’s new content released every single week, whether it’s a new weapon, vehicle, or some ridiculous one-time-only event. But there were moments during Season 6 where playing Fortnite was more than a little frustrating. It’s admirable that Epic is eager to experiment and innovate when it already has a winning formula on its hands, but it often felt like changes were being introduced for change’s sake. Obviously, this all worked out in the end, growing pains and all, because the last few weeks of Season 6 were fantastic, and that has continued into Season 7. But there’s an argument to be made for slightly fewer new additions in favour of maintaining and improving upon the core gameplay’s current excellence.

This week we’ve already seen a fascinating way Epic can maintain the game’s growth without impacting its mechanics. The Block-which acts as a dedicated space for showcasing standout community creations-is a smart idea that blends the new Creative mode with Fortnite’s constantly evolving map. Creative mode provides Battle Pass owners your own personal island to do with as you please-creating your own maps, game modes, and anything else you can imagine that isn’t just recreating de_dust. The prospect of having the best of the these creations appear as a brand-new area to play in every week is incredibly exciting-even if it comes at the cost of Risky Reels-and I can only imagine that feeling increases tenfold for those whipping up their own creations.
I don’t want to sound like a crotchety old Scrooge who’s averse to seeing new weapons or items added to the game, but the rate with which it happens could be dialed down a notch. We all know how volatile adding a completely new element to an online game can be, even with all of the QA testing in the world, so I would like to see new content given the opportunity to breath for a smidgen longer, just to see how it impacts the game before something else comes along and complicates things further. The Block would allow this to happen while still introducing a new element every week-or however often Epic plans on rotating them in and out-to preserve that invigorating sense of evolution and make each new leap from the Battle Bus feel as refreshing as ever. Just, whatever you do, Epic, don’t touch the shotguns again, please.