My Hero Academia Season 4 will begin airing in October 2019, it has been announced. The acclaimed anime series wrapped up its third season in September of this year, with main character Midoriya being introduced to three third-year students that have distinguished themselves in the hero course. One of those students, Mirio Togata, is featured on a new poster teasing the fourth season.

Mirio is shown alongside Midoriya and is wearing his hero outfit, something which has not yet been seen in the anime. As indicated in Season 3, Mirio will play a crucial part in Midoriya’s journey to fulfilling his role as All Might’s successor, so it makes perfect sense that he’d be featured heavily in marketing around the new season. Having said that, we expect My Hero Academia’s colorful-and beloved-cast of supporting characters will also get their time in the spotlight, ahead of the new season kicking off. 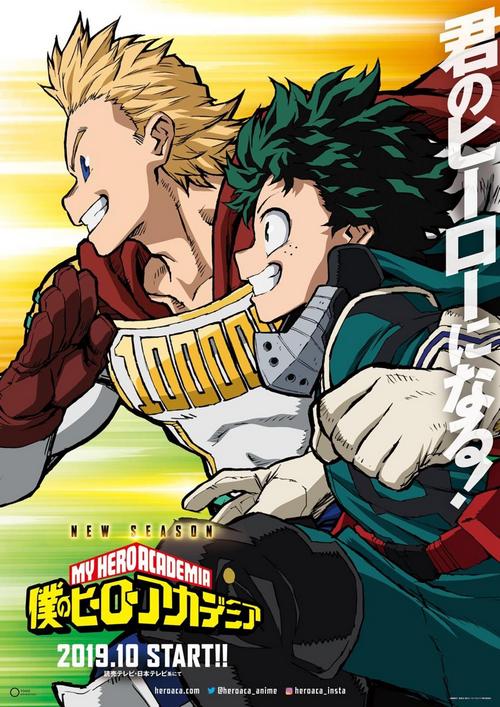 My Hero Academia Season 3 was praised heavily by GameSpot. As part of our Best of Entertainment awards we highlighted it as one of the best anime shows of 2018 and the episode titled «One For All» was also named of the best episodes of a show you could watch this year. If that wasn’t enough praise, My Hero Academia Season 3 was one our picks for Best Superhero Movie or TV Show of the year and was also one of our overall favourite shows of 2018.

2018 was also the year the first My Hero Academia movie released. In our My Hero Academia: Two Heroes review, Dave Klein said the movie «may not hit ‘Plus Ultra’ levels of excitement, and it never matches the highest moments of the show, but if you’re looking for a fun extra dose of My Hero, Two Heroes is certain to satisfy that craving.»