Think Final Fantasy Tactics, but with robots and timers, and you’ll have a basic idea of what BATALJ is all about.

The PvP turn-based strategy game from Fall Damage studios is currently in closed beta, and it looks like it might do a good job of filling a small but largely ignored niche.

Almost without exception, I dislike PvP games. I’m just not into them. If gamers were generally respectful and capable of friendly, non-toxic competition, I’d likely be more open to the idea.

One of the first things I noticed about BATALJ is that it resolves one of my biggest gripes about PvP; you can’t communicate directly with your opponent, so there’s no possibility of hearing about how many preteens your mom is supposedly dating.

When you open up the Quickmatch menu, you’re prompted to select a squad of robots to send into battle against your opponent’s own group. There are pre-made squads to choose from, or you can build your own from more powerful units as you unlock them through gameplay. 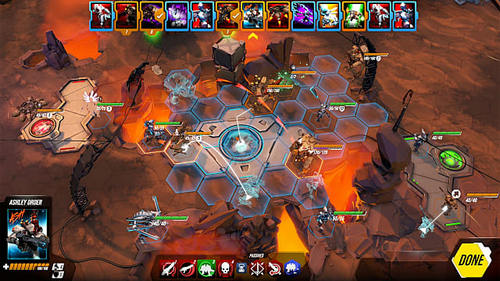 When the match starts, you have two minutes per round to issue orders to all of your units. Once both players have issued all of their commands or the timer runs out, the action phase begins. Robots act in initiative order based on speed modifiers associated with each order that was given.

There are a decent number of buffs, debuffs, and status effects to choose from, adding another layer of things to think about when planning your actions. Powerful or highly useful abilities are generally slow and will push the unit in question farther back in the turn queue.

Of course, you can’t see what orders your opponent has given, so you’ll have to decide how much speed you’re potentially willing to sacrifice in favor of a heavier assault. 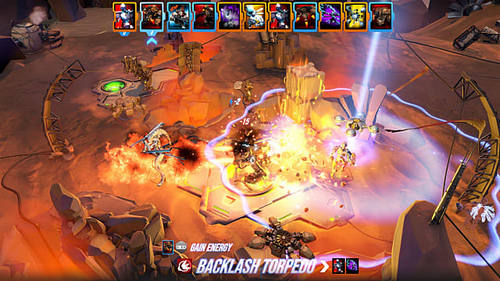 This paradigm is really more of a gentle blending of TBS and RTS setups; as your squads grow larger, two minutes becomes a more restrictive time limit, but it never feels like it’s not enough time. It strikes a good balance between creating a sense of urgency and giving each player a little bit of time to think.

The map is divided into zones, and at the end of each round, the game checks to see if each zone is occupied exclusively by one team’s units. If so, that player is considered to be in control of that zone. For each round that you control more zones than your opponent, you’re granted a point, and the first one to five points wins the match.

Each player also gets reinforcements periodically, so there’s always an element of controlled chaos, and always a chance to bounce back even if you’ve fallen far behind.

BATALJ has a neat, cartoonish sort of art style that makes great use of bright colors. Each robot unit has its own distinct appearance and color scheme, which makes it easy to tell them apart at a glance. 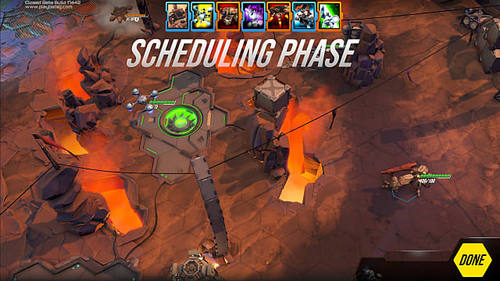 As far as I can tell, there’s only one map right now, and it’s not especially interesting to look at, but I assume we’ll see more variety in locations as development continues.

There isn’t much to say about the soundtrack, which is fairly generic (but at least not overly distracting).

The sound effects are much more interesting. Many of the robot units deliver punchy one-liners or moan woefully when destroyed. Lasers and explosions abound, and there’s a good amount of variety from one unit to another.

BATALJ is (presumably) a pretty simple game under the hood, at least in comparison to much of what’s being released nowadays. On a rig housing a GTX 1080 and an i-7700 4.5GHz processor, I had smooth frame rates and experienced no performance issues. Even more budget-friendly PCs should be able to handle BATALJ without major issues. 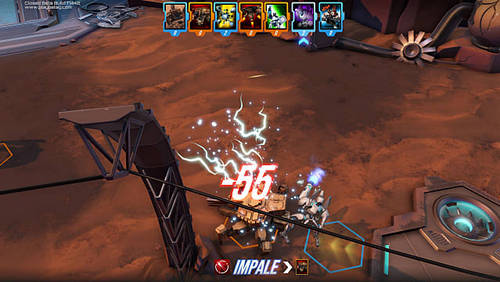 Connections to other players seem stable, although I’ve only been able to play a single live match against another person so far; it was early in the morning, and I don’t think there are a huge number of players participating in the beta. The Quickmatch lobby may be more active later in the day.

There isn’t much here yet-1v1 Quickmatch is the only game mode available right now, aside from a single-player sandbox mode designed to let you summon unlimited units and play them against each other to get a feel for how they all work. That being said, BATALJ seems to be off to a good start.

More variety in both games modes and in different robots to work with would be welcome. A greater number of maps that are more visually interesting wouldn’t be amiss, either. I’m sure all of these things are probably on the developers’ radar and in the works.

If you like both PvP and turn-based strategy games, BATALJ will likely be right up your alley. It’s set to release sometime in 2019 for PC. Keep an eye on the BATALJ game page right here on GameSkinny for more news. 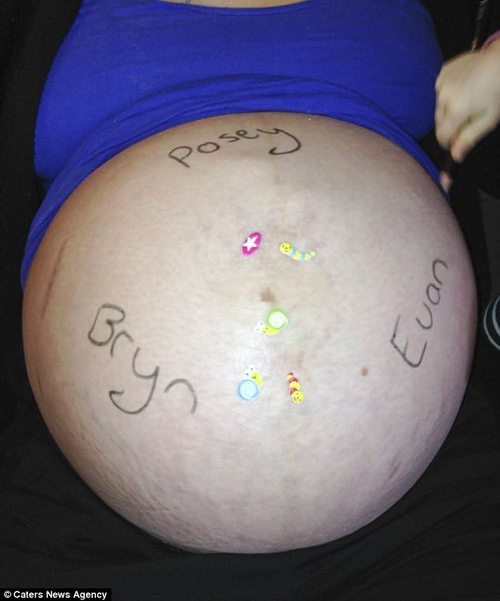 From Software Is Working On Two Unannounced Games