At CES 2019, AMD president and CEO Lisa Su announced the world’s first 7nm gaming GPU, titled the Radeon VII. According to CNET, Su claims it’s the most powerful gaming GPU the company has ever built. 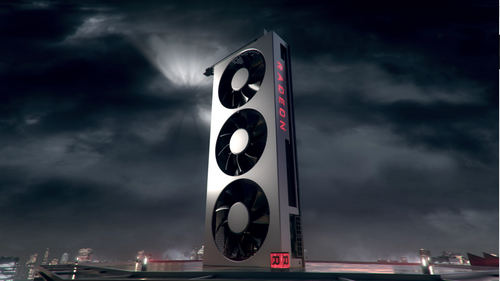 AMD displayed the Radeon VII’s technical prowess at CES, demoing Devil May Cry 5. Su said the game was running «well above» 60 frames per second at 4K resolution. She also mentioned that in comparison to AMD’s Vega 64, most games on average get a 25 percent performance boost on the Radeon VII. Certain titles, such as Battlefield V, can receive as high as a 35 percent increase. The Radeon VII will have 16 gigabytes of high-performance memory and one terabyte a second bandwidth

The Radeon VII is scheduled to release February 7 and cost $700. The gaming GPU comes bundled with the remake of Resident Evil 2, The Division 2, and Devil May Cry 5.

There’s been plenty of announcements coming out of CES this year. Nvidia announced a new video card called the GeForce RTX 2060. HTC had a slew of reveals for its Vive VR products, including a new Viveport subscription model, an upcoming virtual reality social space, and two headsets-Pro Eye and Cosmos. Samsung unveiled two new TVs: one of which the company hopes can flagship a 2019 promotion for MicroLED screens, and another that is so large that it’s about the size of an average living room. LG showcased a new TV as well, one that can roll up and be stored away when it’s not in use.

All three games that come bundled with the Radeon VII come out early this year. The remake of Resident Evil 2 is the only game scheduled to release prior to the gaming GPU though. It launches on January 25 for Xbox One, PS4, and PC. The Division 2 and Devil May Cry 5 are coming to the same three systems, with the former scheduled for March 12 and the latter for March 8. So even if you buy the Radeon VII day one, you’ll still need to wait on two of the games that come with it.

Fallout 76 First-Month Sales: Here’s How The Game Did