Niantic has announced a new holiday event for Pokemon Go. The festivities kick off next week and run into the new year, during which time players will be able to earn bonuses, hatch Eggs more easily, and even encounter more Pokemon originally from the Sinnoh region.

The third annual winter event begins on Tuesday, December 18, and once again, it brings back the festive hat-wearing Pikachu for a limited time. On top of that, Niantic says that more Ice-type and Gen 4 Pokemon will appear during the event; the promotional image the developer shared features Snover and its evolution Abomasnow, along with Munchlax, Chingling, and Croagunk.

Even more interestingly, the image also features three Legendary Pokemon from the Sinnoh region-Azelf, Uxie, and Mesprit-suggesting the trio will make their debut in Pokemon Go soon. On top of that, Niantic says the rare Ice Pokemon Delibird will also be available during the winter event, as will its Shiny variant. 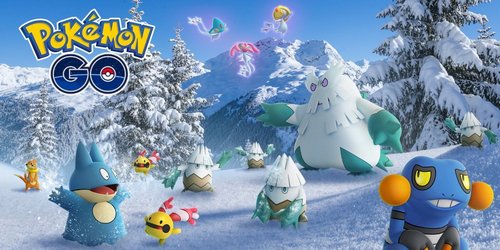 Rounding out the bonuses, Niantic is giving players one Incubator each day when they spin their first Photo Disc. The developer also says that more types of Pokemon will be able to hatch from 7 km Eggs, and players will have a better chance of hatching monsters like Smoochum and Azurill. You can read more about the event on the official Pokemon website.

Before the holiday festivities begin in Pokemon Go, Niantic will host a special Raid weekend event from December 14-17. During that time, Ho-Oh and Lugia will reappear in Raid Battles at Gyms. Players will also have a chance to encounter their Shiny forms.