Metro Exodus is set to arrive on PS4, Xbox One, and PC next month, and like many of today’s biggest releases, it’ll be available in both standard and deluxe editions. Ahead of its launch, publisher Deep Silver has announced another special collector’s version of the game, but this one will be so rare that you won’t be able to buy it anywhere.

Dubbed the Artyom Custom Edition, the package comes with a copy of the Metro Exodus Aurora edition, as well as a variety of physical items based on the ones protagonist Artyom uses in the game, including a functional Nixie watch, gas mask, working bullet lighter, and leather map. The package is also housed in a steel ammo crate and comes with a letter of authenticity signed by Metro author Dmitry Glukhovsky. 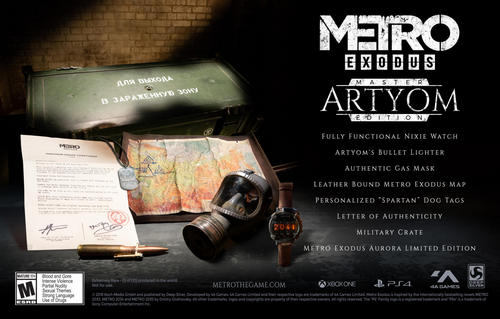 Only 10 of the Metro Exodus Artyom Custom Edition have been produced, one of which was gifted to game developer 4A Games. Deep Silver says the remaining nine will be given away to fans through a series of promotions. These will be revealed on the game’s official website.

If you’re looking to upgrade to a 4K console, Microsoft also recently announced a new Metro Saga bundle, which comes with 1TB Xbox One X, one-month trials of both Xbox Game Pass and Xbox Live Gold, and digital copies of Metro Exodus as well as its two predecessors, Metro 2033 Redux and Metro: Last Light Redux. The bundle releases in February and retails for $499.

Metro Exodus launches on February 15, one week earlier than it was originally scheduled to. The game is set several years after Last Light and follows Artyom and his companions as they trek across a post-nuclear-war Russia. You can read more about the game’s various editions in our Metro Exodus pre-order guide.

Fortnite: How to Complete All the Season 7, Week 3 Challenges