One of the less-frequently touted perks of being an Amazon Prime member is that you get a free subscription to Twitch Prime for no extra charge. Amazon owns the streaming company and presumably wants to create synergy between the two brands. All Prime members have to do is link their accounts to take advantage the perks Twitch Prime get each month. As it turns out, those perks are valuable: in 2018, Twitch Prime members received over $3,000 worth of free PC games and digital items.

Most of that value came from the games Twitch gives out to Prime members each month. Last year, subscribers received over 70 free games, including well-received titles like SteamWorld Dig 2, System Shock, Pillars of Eternity, Psychonauts, and Gone Home. In addition to games, Twitch also gave out in-game loot for titles like Fortnite, PlayerUnknown’s Battlegrounds, Warframe, and Hearthstone. 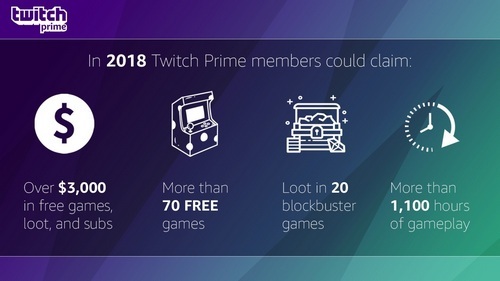 To access your free Twitch Prime games, you’ll need to download the Twitch desktop app for Windows. Open the app, and you’ll find all the titles you’ve claimed in the «My Games» section, where you can install and launch them.

Another bonus for Prime members is a free Twitch channel subscription each month. Normally $5, a subscription helps financially support your favorite streamers. That’s in addition to the standard set of Amazon Prime perks, like free two-day shipping on many items, access to Amazon Prime Video, and more. You can learn more about Amazon Prime here.