As expected, peripheral-maker and PC parts manufacturer HyperX unveiled a handful of new gaming gear at CES 2019. Fresh off the heels of Cloud Mix release back in October, the company continues to increase its product offerings across the board, from mics to mice to headsets.

Some of the products, such as the Quadcast standalone microphone, are brand-new additions to the HyperX catalog. Others, such as the Pulsefire Raid RGB gaming mouse and the Predator DDR4 RGB 16GB RAM module, are ostensibly variants of current offerings.

Regardless of their novelty, Mark Leathem, Vice President of HyperX, said that it’s the company’s goal to continually design and manufacture peripherals that meet the needs of all gamers.

There’s nothing like CES to put a spotlight on the HyperX commitment to delivering high-performance gaming products for all levels of gamers.

Whether immersing yourself in a game of battle royale, battling friends while playing online basketball, or throwing down from your couch in a fighting game on Nintendo Switch, PlayStation, or Xbox, the new high-performance HyperX products further enhance your gameplay experience.

While it remains to be seen how much the company’s new offerings will «enhance your gameplay experience» since we haven’t yet been able to get our hands on them, we do know a little bit about them and what they’ll bring to the table when they release later this year.

While HyperX has been making RAM, headsets, and mice for some time now, the Quadcast will be its first microphone.

Built specifically for PC, PS4 and Mac streamers, the Quadcast will come with an anti-vibration shock mount, on-mic gain control adjuster, up to four polar patterns, and tap-to-mute functionality.

Interestingly, the release materials don’t mention anything about Xbox compatibility. However, other HyperX products, such as the Cloud Flight gaming headset, aren’t compatible with Xbox either. 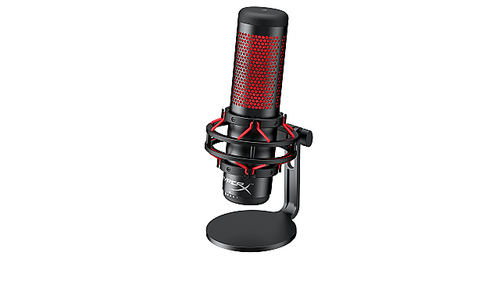 OK, another set of HyperX headphones – this brings the current count to 10 if you count every current variant and the upcoming Alpha Purple Edition. And while that number is surely indicative of Leathem’s previous promise to provide «high-performance gaming products for all levels of gamers,» that’s still a lot of headsets from one company.

However, what’s might really set these two headsets apart from everything else HyperX has on offer is the inclusion of Audeze 100mm planar magnetic drivers and Waves NX 3D audio tech. Both of these audiophile-level technologies look to vault HyperX into the high-end headphone sonisphere if everything’s pulled off just right.

We think both the Pulsefire FPS and Pulsefire RGB are pretty great gaming mice. But not all gamers can get away with having only a few buttons at their disposal. Some, like MOBA players, just need more.

That’s where, presumably, the Pulsefire Raid RGB will come in. Featuring 11 programmable buttons, the mouse is designed for customizability (among other things).

Of course, the mouse will also feature other gaming mouse staples such as customizable DPI (up to 16,000 DPI), responsive tracking, and a Pixart sensor, which is the same 3389 found in the Pulsefire Surge RGB. The mouse’s Omron switches will also be rated for 20 million clicks.

The biggest takeaway here is that the Cloud Alpha headband will be getting an upgrade, «featuring softer, more pliable leatherette.» It might also be purple, but HyperX didn’t say in its release.

Other than that, it appears to be essentially identical to the current Cloud Alpha.

HyperX also said that it has expanded the availability of the recently-released Cloud Mix headset, which can now be found worldwide.

The company also released a new 16GB module for its Predator DDR4 RGB RAM, which will be available at speeds of 3000MHz and 3200MHz starting this month for $167.

Stay tuned to GameSkinny for more on HyperX, as well as reviews for the Quadcast, Cloud Orbit/Cloud Orbit S, and Pulsefire Raid RGB.