This Thanksgiving we’re thankful for many things, and among these is Fortnite’s Battle Stars. You might think they’re not that important in the grand scheme of things, and you’re probably right. However, they’re crucial to levelling up the Battle Pass and giving us access to those cool cosmetics that briefly make people feel like they’re cool, so maybe they are important after all.

We’re now in Fortnite Season 6, Week 9, which means there is just one more week left after this one before the season is over. Challenges for the week are available now and although there’s nothing too surprising in both the Free and paid Battle Pass sections, you’ll have to put in the work to get them done.

In the Free section players will need to get their hands on a vehicle and then catch 30 seconds of airtime. After that they’ll need to score 10 or more on three different Carnival Clown Boards, and begin a multi-part quest by eating a mushroom. Once that is consumed, another stage will reveal itself; there are a total of five stages.

In the paid Battle Pass section, you’ll need to do 300 points of damage using either a Clinger Stink Bomb, or Grenade. Fortnite’s newest weapon, Dynamite, must be used to do 10,000 points of damage to structure for the second challenge. The final two involve getting three kills with a grenade launcher, and then dealing 100 damage to enemies with a grenade. The latter of those two is the first part in a three stage challenge. Take a look at the full challenge list below. 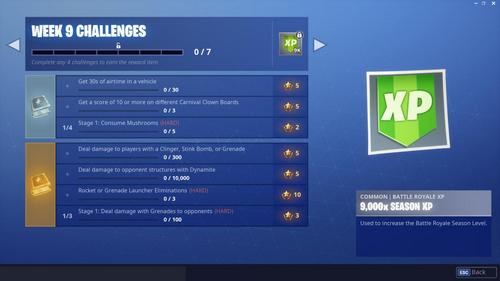 On November 20, developer Epic Games released Fortnite’s 6.30 update, introducing a new LTM called Wild West. This mode limits weapons to those that would be used by gunslingers in the Wild West, namely the Hunting Rifle, Pump Shotgun, Double Barrel Shotgun, Six Shooter, and Minigun. The update also brought with it a new weapon called the Dynamite stick. This throwable is also usable in the Wild West LTM and dishes out 70 damage to players and 800 to structures.

After it was made available Epic noticed reports that the Fortnite client was more prone to crashing. As a result of this, the weapon was pulled briefly, before being added back in. As part of the fix, Epic also tweaked the Mounted Turret. You can read the patch notes through the link above to see what else the update tweaked, changed, and added.

Fortnite is also having some dance drama right now, with Scrubs star Donald Faison pointing out that Epic Games has ripped off one of his routines. In Scrubs, Faison busts some slick moves to the tune of Bell Biv Devoe’s Poison, and it’s become a fairly recognisable routine. This dance has since shown up as an emote in Fortnite. When asked to perform the dance at a recent Scrubs reuntion, Faison said, «If you want to see it, you can play Fortnite, because they jacked that sh**!»

You Can Now Kill Sean Bean (In Hitman 2)

Best Places To Buy The Game