Mario’s most recent sidescrolling adventure is coming to Nintendo Switch next month as New Super Mario Bros. U Deluxe. The title bundles the original Wii U launch game alongside its more challenging DLC expansion, New Super Luigi U, with a couple of new playable characters thrown in for good measure. As it turns out, it boasts another surprise feature over the Wii U version: NES controller support. 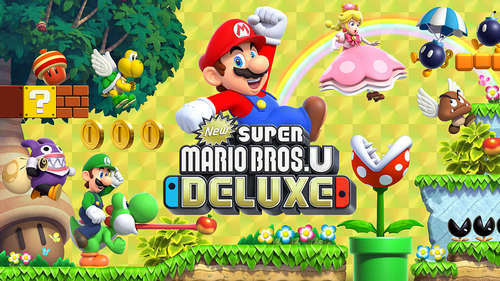 As GameXplain discovered, New Super Mario Bros. U Deluxe is compatible with Switch’s NES-style controllers, which are one of the company’s exclusive offers for Nintendo Switch Online subscribers. Nintendo had advertised the NES controllers as only being compatible with Switch’s NES game library, but they can indeed be used with other titles; however, given how few buttons the gamepads boast, most games are effectively unplayable with them.

New Super Mario Bros. U Deluxe, on the other hand, very much follows in the vein of Super Mario Bros. 3 and Super Mario World, so the lack of buttons isn’t an impediment here. As GameXplain notes, you’ll need to tweak the default control scheme so that B serves as the run button, but it appears there will otherwise be no issues if you try playing the game with the NES controllers, just like a classic Mario platformer.

As previously mentioned, the Switch NES controllers are only available to Nintendo Switch Online subscribers. If you have a membership, you can order them through Nintendo’s website. Each set retails for $60 and comes with two controllers. Just like standard Joy-Cons, these can be recharged by slotting them into the sides of the Switch itself while it’s docked.

New Super Mario Bros. U Deluxe launches for Switch on January 11, 2019. New to this version are two playable characters, Nabbit and Toadette, both of whom have abilities geared toward helping newer players; the former is impervious to damage, while the latter can grab a new power-up-the Super Crown-and transform into Peachette, who can double jump and hover in the air using her billowy dress.