In anticipation of the February 14 release of the next Civilization 6, Gathering Storm, Firaxis has begun announcing which new civilizations will be added to the game. 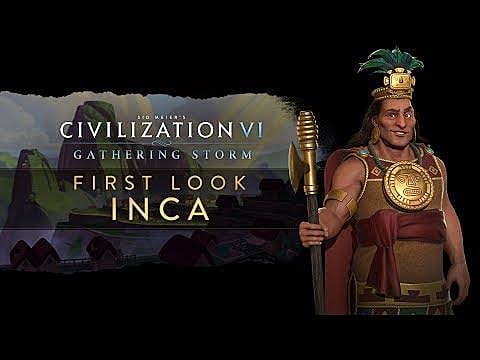 As the main theme of Gathering Storm is the way in which humans interact and change the environment around them, the Inca fit perfectly into the expansion’s new schema.

For example, the Inca gain benefits for building close to mountains. The terrace farm, a unique tile improvement specific to the Inca, is similar to a farm but can be constructed on hills. It gains bonuses for being built next to mountains or a water source. The civilization also has the ability to work mountain tiles, which provide production and bonus food for any adjacent terrace farms.

Even Pachacuti, the first leader announced for the Inca, has special abilities that fit into the mountain theme of the Inca.

Second, Pachacuti has an ability that grants a bonus to trade routes destined for a player’s own cities, while domestic trade routes grant bonus food for each mountain at its destination.

Finally, the unique unit for the Inca is the Warak’aq, a reconnaissance unit that has the ability to attack twice a turn.

Overall, the Inca are an interesting addition to Civilization 6. They are able to gain benefits from mountains that other civilizations cannot use, and their focus on food and production ensures that they are a flexible civilization that can realistically pursue any victory condition.

Gathering Storm is set to release on February 14.

Quake Champions’ Next Update Changes How Players Get Rewards