The rumored foldable phone from Samsung, the Galaxy Fold, is finally a reality. Samsung formally unveiled the device during its Unpacked event, showcasing what it can do and announcing both a release date and price-the latter of which is eyebrow-raising, to say the least.

The Galaxy Fold releases on April 26 and starts in price at $1,980. That is not a typo. With Apple having pushed premium mobile phone pricing well above the $1,000 mark with its iPhone X line, Samsung is taking things much further with its new innovation.

As detailed by CNET, the Galaxy Fold features a 7.3-inch display when it’s unfolded into its tablet format; while folded, its screen is a 4.6-inch display. It features two different batteries-one for each side, to provide power while enabling the folding functionality-and is equipped with a whopping six cameras. It also has 12 GB of RAM and is available in four colors: Cosmo Black, Space Silver, Martian Green, and Astro Blue. 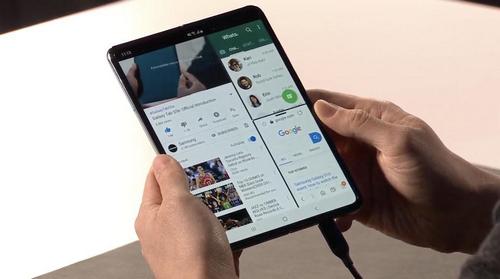