All of the characters of Apex Legends handle a little bit differently. Combining their abilities is what sets Respawn Entertainment’s game apart from other battle royale shooters and adds an element of team-based strategic thinking that can help you win matches. It all comes down to picking the right character and knowing exactly what their abilities and limitations might be.

If you’re looking for a hardcore offensive approach to Apex Legends, Bangalore is a good choice. The Professional Soldier has abilities great for messing with an enemy squad, distracting them, confusing them, and taking away their capacity to fight. Smoke grenades and airstrikes can stun and confuse opponents, and Bangalore’s increased speed makes her great for getting into fights, flanking enemies, and escaping bad situations.

Check out the tips below for a full rundown of everything Bangalore’s capable of, and some of the ways you can use her abilities to get the upper hand against your opponents. We’ve also run down a whole lot of useful information Apex Legends doesn’t tell you, and spent some time myth-busting to find out exactly what is and isn’t possible in Apex Legends, so check those out. You might also want to read our Apex Legends review.

Bangalore’s abilities are mostly geared toward offense, so you want to play her pretty aggressively. It’s definitely possible to drop her smoke grenades and added speed to help you escape, but they’re more effective when used to help you take down squads. That doesn’t mean you should act like an unstoppable killing machine as Bangalore-you’re just as vulnerable as the professional soldier as with any other character-but her offensive capabilities can be formidable in battle situations, and if you play her too defensively, you’ll miss out on those benefits.

Getting good with Bangalore is about learning how to get into the right position at the right time. Effectively combining smoke grenades to obscure your approach with the speed boost you get under fire can get you right up on top of an enemy squad before they can deal with you, and the same is true for escaping battle situations or getting around cover to flank enemies. Stay mobile and work on attacking enemies when they don’t expect and you’ll rack up the kills with Bangalore. 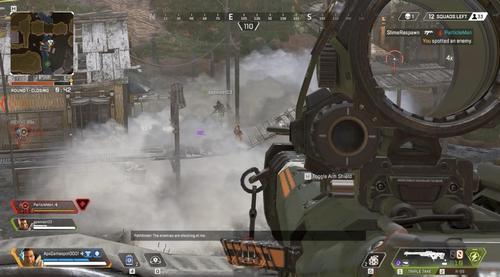 Getting shot at can actually be a good for Bangalore: Her passive ability makes her sprint faster when taking fire. That means you can quickly get away from being shot in a lot of cases, but Bangalore’s Double Time ability is even better for closing range against an enemy squad before they can effectively deal with you, forcing them into a closer fight than they might want.

Bangalore can shoot a set of three smoke grenades with her Tactical ability, blanketing an area and greatly reducing visibility. Smoke arcs like any thrown grenade, then creates a big smoke screen that spreads out into quite a large area to make a thick wall.

For an ultimate ability, Bangalore can call in an airstrike called Rolling Thunder. It drops a series of missiles from the air that slam into the ground before exploding shortly afterward. Unlike Gibraltar’s mortar strike ultimate, which concentrates on a circular area, Bangalore’s rolls out in a straight line over a given area. The missiles that land do damage as well as stun anyone who’s caught in them, which makes it possible to keep fighting in the midst of a strike and finish off enemies who are caught in it.

Tips For Playing As Bangalore

Bangalore is a good choice if you’re new to Apex, because her abilities are highly offensive. Unlike playing someone like Gibraltar, Lifeline, or Recon, you don’t really have to worry about using your abilities to save teammates. Bangalore does have some defensive options, which are great to have in a pinch, but if you want to learn the ropes of Apex Legends, Bangalore is a good character to use to do it.

Go nuts with the Smoke Launcher. Shoot it at enemies to mess with their ability to shoot at you, pop it near your squad so they can move around without being seen, or use it to block off visibility when crossing open ground. You can seriously hamper an enemy’s ability to fight if you can take away their ability to see, and the cooldown on the Smoke Launcher means you can fire them pretty quickly even in a combat situation. Dump smoke into a fight to make it hard for enemy squads to combine fire on your teammates at range, and to even up the odds at close quarters. 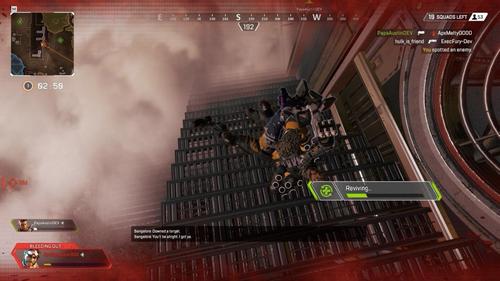 The Smoke Launcher can help you in defensive situations, too. Use smoke to help you get out from under fire and to revive downed teammates. As with other characters’ abilities, dropping smoke where you don’t plan to be can distract enemy squads.

Bangalore’s smoke combines very well with Bloodhound’s abilities. He can see through the screen with his ultimate ability, and working together you can effectively blind an enemy squad while tearing into them while they’re defenseless. You can also see through the scope with any high-tier digital scope, if you can find one. Check supply drops!

The Double Time ability is great for crossing open ground quicker than other characters. If you can avoid getting killed, you can use Bangalore’s speed to draw fire from an enemy squad while the rest of your team gets into position for flanking. Stay in communication to create smart tactical situations. You can also use Double Time and smoke to catch up to enemies quickly, or to get out of a bad situation and heal up. The speedier sprint is also handy for running through your own Rolling Thunder strike, allowing you to get to opponents while they’re worried about staying alive.

Rolling Thunder is great for any battle situation, but be aware that it can stun your teammates (and you) as well as enemies. It’s still best used in battle situations where it can mess with the enemy, allowing you to down them or finish them off quickly. Just be careful about when and where you throw it, and make sure your teammates are ready to deal with it.

Combining Rolling Thunder with smoke creates serious chaos. Chuck a few grenades at enemies who are blinded and stunned and you can create even more.

It’s important to note that Rolling Thunder is an offensive ability that’s meant to supplement your fighting, but not replace it. Warheads dropped in the strike don’t explode right away and can potentially be avoided-but it will always send enemies scrambling. Use it to flush people out of cover and out of position and sow confusion, or sprint through it to catch people running for safety when they’re not ready for a fight. 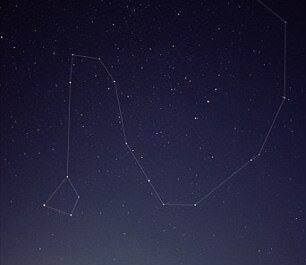