Phoenix Labs has announced that its Monster Hunter-like game, called Dauntless, will move from its own current launcher to the Epic Games Store. Also, when the game releases on consoles and mobile later this year, Dauntless will support both cross-platform multiplayer and progression on all systems.

There hasn’t been an official confirmation as to when Dauntless current launcher will be retired, but it’s probable that the PC version of the game will move to the Epic Games Store prior to or around the Xbox One and PS4 release. Phoenix Labs aims to have every player’s saved data for Dauntless be tied to their Epic accounts, so when they transition to another system, their data goes with them. This system will apply to the Nintendo Switch and mobile versions of the game that launch later this year as well, allowing for total cross-play. 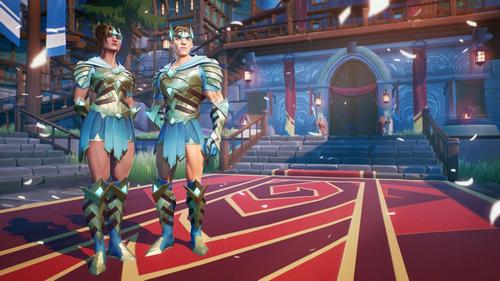 Phoenix Labs has also announced the release of Hunt Pass Season Two, which is now live in Dauntless and continues until March 13. This second season is Valentine’s Day-themed, and introduces new limited-time rewards, such as platinum bundles and romantic emotes. The pass has a free Basic track, and an Elite track that costs 1,000 platinum. Both tracks have 50 levels, but going Elite will net you special Ace chips and notes, exclusive transmogs, and more.

Dauntless is currently still in open beta on PC. When it launches on the Epic Game Store, your progress will carry over, regardless of which platform you choose to play on. Dauntless is scheduled for an April release on Xbox One and PS4, and will also launch on Switch and mobile before 2020.

Dauntless is simply the latest in a long long of exclusive titles that Epic has managed to secure. Although the new PC game store started out with smaller exclusives, such as Ashen and Hades, it has recently been making larger moves. For example, both Metro Exodus and The Division 2 are launching exclusively through Epic, and Ubisoft has confirmed that more of its 2019 titles are scheduled to only release through the PC game store as well.

Yoshi’s Crafted World Is Cute… But Is It Fun?