While we’re still a little more than two months away from the release of The Division 2, Ubisoft has gone ahead and released the PC requirements for the game. Whereas only the minimum and recommended requirements for a game are typically released ahead of launch, those for The Division 2 also include specifications for «High» (1440p) and «Elite» (4K).

Specifications include both NVIDIA and AMD GPUs, as well as Intel and AMD CPUs. Additionally, The Division 2 will run on on Windows 7, Windows 8, and Windows 10; even though it’s probably safe to say most PC gamers have moved on to Windows 10, it’s nice to see Windows’ legacy OS making an appearance on the spec sheet. 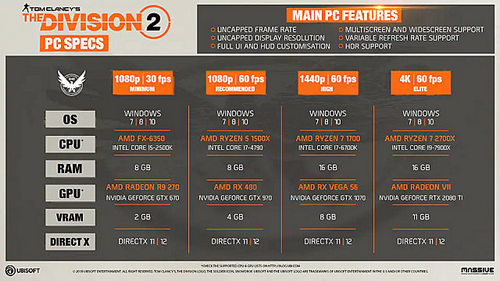 Worth noting is that Ubisoft built the PC version of The Division 2 from the ground up. According to a recent news post on the Ubisoft website, «the development team at Ubisoft Massive has fully optimized the game for PC». This means the game will feature certain functionalities sometimes not found in one-to-one console to PC ports, such as:

Earlier this week, Ubisoft made waves by revealing that The Division 2 would skip Steam; instead of partnering with Valve for its latest release, like it did with Assassin’s Creed: Odyssey late last year, Ubisoft decided to partner with Epic Games as the exclusive third-party marketplace for The Division 2. Ubisoft will still sell the game through its first-party store.

With Far Cry: New Dawn set to release in February, it’s interesting that The Division 2 is the first Ubisoft game announced for sale through Epic’s new storefront – and the first title that will be skipping Steam. As of this writing, it remains to be seen if New Dawn will also shun Steam for Epic Games.

The Division 2 is set to release on March 15 for PC, PlayStation 4, and Xbox One.