PUBG Corp. has released a new trailer for PlayerUnknown’s Battlegrounds that teases a location on the game’s new Vikendi map. The location is a secret cave that’s hidden on the snow map. 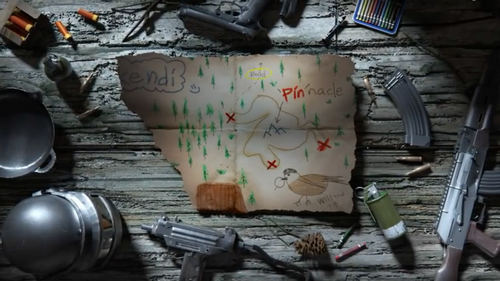 Players discovered the secret location a few days ago, according to VG247, after Patch 25 went live on PUBG’s PC Test Server. The mysterious spot is difficult to find, and this new trailer is the first time PUBG Corp. has even acknowledged that it exists. The cave is hidden inside some rock formations between Peshkova and Podvosta; it’s located west of the former and northeast of the latter. You can only find it on the PC Test Server for now.

To enter the cave, you’ll have to use explosives or a rapidly moving vehicle and strike a specific spot, which will cause the illusionary wall to fall away. If you happen to find the cave, your efforts will be rewarded with the discovery of several airdrop loot crates, which are typically filled with the rarest, most powerful weapons and gear you can find in PUBG.

Not much is known about this hidden cave, other than that the process for how it was secretly released by PUBG Corp. and eventually discovered by players is a first for the game. There hasn’t ever been anything like this in PUBG before. Although, according to an interview with Newsweek in December, additions like this might not be the last.

«There is a lore to PUBG, but we all prescribe to a show don’t tell mentality,» PUBG art director and team lead David Curd said. «In the environmental set dress we offer little clues, and, because this is an online game that’s constantly updated, we’re always leaking, adjusting art, and adding more lore details and story stuff. We do have stories we’re excited to tell.» Based on the nature of this cave, and how it received its very own trailer, it could be the first of one of these lore details planned for the game.

PlayerUnknown’s Battlegrounds is available on PC, Xbox One, PS4, and a mobile. A free-to-play version with reduced graphics, titled PUBG Lite, is scheduled to launch in southeast Asia.