Super Smash Bros. Ultimate isn’t the only Switch game receiving a major update this week. Nintendo is also rolling out a new patch for Mario Tennis Aces. The update is slated to arrive on January 31 and will make a range of balance adjustments, kick off another Co-Op Challenge, and add a new playable character: Boom Boom. 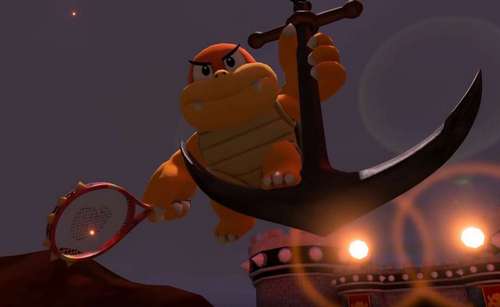 Beginning February 1, players will be able to unlock the classic Super Mario Bros. 3 mid-boss by competing in the game’s Online Tournament mode; everyone else, meanwhile, will unlock him automatically after March 1. You can get a look at Boom Boom in action in the trailer above.

In addition to Boom Boom, Nintendo is bringing back the Boo Hunt Co-Op Challenge until March 2, giving players another opportunity to unlock special alternate costumes for Boo. This particular challenge uses Swing Mode and has players teaming up online to hit the ball at as many Boos within the time limit.

Beyond that, Nintendo is adding a Hosted Match mode for online and LAN play. AI is also being improved, and a number of characters are receiving balance adjustment. You can read about all of the changes in the full patch notes.

A number of new characters have been added to Mario Tennis Aces since the game’s launch, including Shy Guy, Diddy Kong, Petey Piranha, and most recently Luma, who arrived at the beginning of January. The game’s next free character will be Pauline, and she’ll be available in March.

Anthem Early Access Release Is Live, But Only For Select Players