Far Cry: New Dawn sees Ubisoft’s open-world FPS series head into the post-apocalypse, where society has fallen after the events of Far Cry 5. One of the game’s new features are Expeditions, a series of self-contained missions that take place outside of the main setting of Hope County, and around various US-based locations.
Expeditions are snatch-and-grab affairs; your goal is to sneak into an enemy-occupied region, steal a package with valuable crafting materials, and get to an extraction point as the whole base comes chasing after you. One particular mission is dubbed «Government Plane Wreck», and involves sneaking into an enemy-occupied base established in the body of an enormous military aircraft. You can see a narrated walkthrough of the mission in the video above.

Of course, it wouldn’t be a perfectly shady government plane without a few secrets, and it doesn’t take much for fans of stealth games to you to quickly realize that the government plane in question is the C-147B Paladin from the Splinter Cell series, which served as the mobile HQ for the special ops unit, Fourth Echelon.

But it goes further, of course. Throughout the plane, you can find conveniently-placed notes signed by «SF», presumably Splinter Cell protagonist Sam Fisher, and they describe what happened to him after the events of Far Cry 5. Turns out, he was on his way to find his daughter, Sarah, after the apocalypse, and he ruminates over the fact that the world needs survivors in this day and age. The notes also make references to Fisher’s fellow Fourth Echelon agents Isaac Briggs, Anna Grímsdóttir, Andriy Kobin, and Charlie Cole.

The icing on the cake is that you can find and switch on a Shadownet terminal within the plane, which that opens up a secret wall compartment, letting you retrieve a full Sam Fisher getup, complete with the iconic trifocal goggles, for use with your New Dawn character. The flavor text for the outfit pokes fun at the relentless enemy barks that the Splinter Cell series was infamous for: «Fisher’s on the loose! I heard something, better not be Fisher. Fisher wouldn’t try his luck here, would he? That’d be f***in’ crazy! Fisher, Fisher, Fisher!» 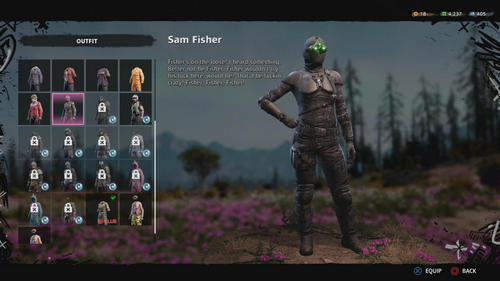 The last time we saw Sam Fisher in his own game was 2013’s Splinter Cell: Blacklist, but this isn’t the first time we’ve seen references to the series in a recent Ubisoft game. He made a cameo in Tom Clancy’s Ghost Recon Wildlands, which stirred up talks of a new game, which Ubisoft previously hinted at in 2017. Does this mean we should expect more from the series in the near future? Are the Splinter Cell, Ghost Recon, and Far Cry universes all connected? Should we expect more Splinter Cell references in The Division 2?

You’ll be able to play through this Splinter Cell-themed Expedition when Far Cry: New Dawn launches on February 15, 2019 on Xbox One, PlayStation 4, and PC.

The Best Xbox One Game Deals On Xbox Live This Week

Fortnite Challenges Have Grown Stale, And Epic Needs To Shake Them Up Fast