The latest story trailer for Ubisoft’s The Division 2 has arrived, and it provides one of the best looks so far at the narrative for the upcoming open-world shooter and its setting in Washington D.C. It also provides a first look a post-apocalyptic frog with unique hopping properties. 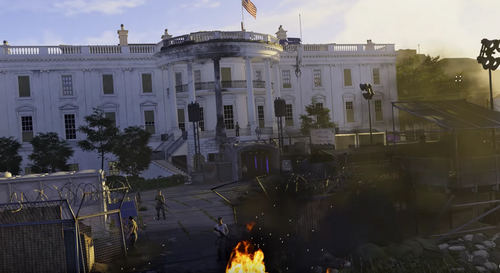 You play as an agent of The Division, and after surviving the events of the first game in New York, you’re headed to the nation’s capital to do it all again, it seems. The nation is divided, with the narrator saying America is «slipping into civil war.» The country is on the verge of «total collapse,» and you’re tasked with taking down various enemy groups to restore democracy to the country.

In addition to providing a better look at The Division 2’s story and setting, the video also shows some of the new weapons and gear such as drones and the crossbow. Also, at around 47 seconds, you can see a frog whose jump appears to have no effect on the water below. This frog also does not appear to move very smoothly. Must be the virus.

Given the current political tensions happening in real-world America today, it will be interesting to see how The Division 2’s story unfolds and how close to home it might strike.

The Division 2 launches on March 15 for PS4, Xbox One, and PC. The PC edition will launch through Fortnite developer Epic’s new store and Ubisoft’s own store, but not Steam. A «private beta» for people who pre-order begins on February 7.