Gearbox’s May 1 gameplay reveal of Borderlands 3 has come, providing us with our first good look at what to expect from the new entry in the loot shooter series. Below you’ll find our impressions of the game’s many changes, its new characters, and how you can effectively play on your own or with others. For more, check out our breakdown of the new gameplay features and an explanation of who its new villains, the Calypso twins, are. 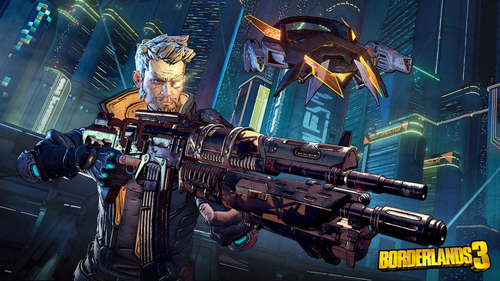 Every one of the mainline Borderlands games can be played solo or with a team, but Borderlands 3 is the first to actually make the former playstyle worthwhile. The newest entry to the Borderlands franchise gives you more agency over how your Vault Hunter evolves than ever before, allowing you to better construct a character for a solo run through the campaign.

Like in Borderlands, Borderlands 2, and Borderlands: The Pre-Sequel, each playable Vault Hunter in Borderlands 3 has three skill trees, each of which contains distinct abilities and perks. That’s really where the similarities end, though. In the first three games, every Vault Hunter unlocked a unique ability first, and then all three skill trees built upon this ability. In Borderlands 2, for example, Maya the Siren unlocks Phase Lock which allows her to trap an enemy in place for several seconds. This skill can be used for defensive crowd control by unlocking her Motion skill tree, supportive healing by going for her Harmony tree, or offensive elemental damage with her Cataclysm tree.

Despite these three differences, though, it doesn’t fundamentally change how Maya plays. Because she always has to unlock Phase Lock first, and since all her skills build on this one ability, Maya is mostly a support character. Her Phase Lock can be used as a powerful damage dealer, but it doesn’t change that Maya’s purpose on the battlefield is to always disrupt the movements of the most powerful enemy so that she and her teammates can focus on the small fry or more easily pool their resources into taking down one central threat. Mordecai, Zer0, Lilith, and all the other Vault Hunters from every Borderlands game we’ve gotten so far fall into this same trap. With all of their trees focused on one particular ability, they all end up in one class and always carry the strengths and weaknesses that such a class entails. This is great for when you’re playing as part of a team where everyone needs a role and squadmates can account for any weaknesses you might have, but it also makes certain Vault Hunters much harder to play with if you’re going it alone.

Borderlands 3 abandons this format, and it’s for the better. Instead of having one unique ability that all three skill trees build upon, Borderlands 3’s Vault Hunters have three distinct abilities-one for each of their three trees-and then one unique trait that separates them from the other characters. So the three skill trees of each Vault Hunter in Borderlands 3 are built around different abilities, allowing each one to have three distinct playstyles.

«I’m really proud [of] the four [Vault Hunters’] trees-the way you configure them and what you do-are very, very different than what we were able to do in Borderlands 2, which was even a big leap on what we did in Borderlands 1,» Gearbox managing producer of narrative Randy Varnell said. «[Before] it was mostly one action skill with just some numerical changes.»

Amara, the playable Siren in Borderlands 3, for example, can unlock Phasegrasp as her action skill in the Fist of the Elemental skill tree, which allows her to lock enemies in place like Borderlands 2’s Maya. The tree is also filled with many of the supportive powers that Maya has. However, Amara can unlock Phaseslam in her Brawler skill tree if you prefer, which sends her careening down on enemies with deadly force and leads her down a path of close-quarters combat. Finally, Amara can unlock Phasecast in her Mystical Assassin skill tree, which transforms her into a long-range fighter that can fire immense elemental blasts from a distance.

Because each of Borderlands 3’s Vault Hunter’s skill trees are so distinct, it’s actually beneficial to unlock passive abilities in each one. Borderlands 3 allows you to create custom loadouts and switch between which active skill you have equipped on the fly. So if you’re playing with Amara and you have Phasegrasp equipped, but you’re about to enter an enclosed enemy base, you can switch over to Phaseslam if you have both skills unlocked. Having multiple active skills unlocked also motivates you to earn the abilities in their respective trees, which encourages you to create your very own Vault Hunter. For example, you might want the destructive powers of Amara’s Phasecast, but you don’t want to be a glass cannon so you can unlock some of the supportive and close-combat passives in her other two trees. And since you can create your Vault Hunter to fill whatever role you want, choosing a character does not lock you into one specific playstyle, which in turn makes it much easier to play by yourself if you want to.

«[Skill trees are] a little bit more tweaky than Borderlands 2 wise-you can do more with it,» Varnell said. «I would say that Amara is a great example of the fairly straight forward, I mean she’s a Siren. She likes to get close to the fight… So she’s a really great one to start with.»

Which isn’t to say that your choice of Vault Hunter is arbitrary. Far from it. Each characters’ unique trait means you get very different experiences with each one. «If you look at Amara, Amara has an extra skill for her elements,» Borderlands 3 game director Paul Sage said. «And so [with her] you can decide what elements are going to be modified. So each character kind of has that, that very special, unique thing. So Amara has her action skills she can equip, she has augments she can put in them, and then she has an elemental change she [can apply]. But, [the others] like Zane are very different.

«For Zane, you can [equip] a second action skill but you actually give up your grenade to do that,» Varnell said. «So you have to think about how your action skills can work together and how you augment them and how you spec them out and really to get the most of that if you’re going to give up grenade play. What we found in our playtesting is that Zane really, really, really appeals to the min-max type of people who want to get that advanced game play…. [He’s] really a numbers play at the end while Amara, she’s just about energy and fun.»

When I was playing with Zane, for example, I equipped both his Digi-Clone (a holographic decoy that shoots enemies and that Zane can switch places with) and SNTNL (an automated drone that tracks down and kills enemies) to make a character that survived by constantly teleporting around the battlefield and bamboozling his targets by hitting them from multiple directions at once.

«I think we’re gonna see a lot of cool builds and build comparisons and play styles,» Varnell continued. «I think [Borderlands 3] is the coolest Borderlands we’ve done so far in regards to what you can do with the build and what you can do to find a different type of play style. And once you start interweaving that with co-op play, it gets crazy.»

Once you do decide to pick up co-op play, Borderlands 3 doesn’t punish you and your friends for being vastly different levels like previous Borderlands games do. Both enemies and loot scale when you are playing in a party, so you no longer have to wait for your friends to catch up to your level or grind to keep up with them. You’ll each find loot appropriate to your respective levels and both damage received and dealt will scale. High-level players don’t dominate and low-level players don’t get squashed.

All in all, from what we’ve seen, Borderlands 3 feels like the first in its franchise to truly give solo players a chance at enjoying the game how they want to and at whatever pace they desire. You’re not punished for playing by yourself and possibly out-leveling your friends, and you have greater control over how your chosen Vault Hunter’s abilities evolve. We still have to wait and see the skill trees for Moze the Gunner and FL4K the Beastmaster before signing off on all of Borderlands 3’s Vault Hunters, but the first two have already confirmed that Gearbox’s upcoming game changes the series’ skill tree feature for the better.

Borderlands 3 is scheduled to release for Xbox One, PS4, and PC on September 13.