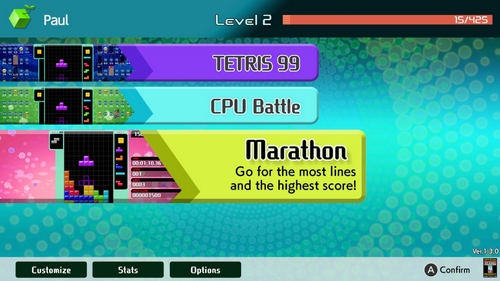 These modes are playable offline, and that’s notable because the main Tetris 99 experience is an online-only game. It also means that you no longer need to have a Nintendo Switch Online membership to play Tetris 99 (if you buy the $10 DLC).

Nintendo also announced more details on the next Maximum Cup online event for Tetris 99. Maximus Cup 3 begins May 17, and just like the previous ones, you get points for the matches you play regardless of how you finish. Those who get 100 points or more will receive a new theme modeled after the original Game Boy. The event runs until May 19 at 11:59 PM PT.

Nintendo teased that it will announce even more new modes for Tetris 99 at a later date.

Tetris 99 has been very successful. Just this week, Nintendo president Shuntaro Furukawa talked about how the game has «helped maintain Nintendo Switch engagement» and also get more people to sign up for Nintendo Switch Online.

The Steam Games You Can Play For Free This Weekend

Where Is The Junk Junction Treasure Map?