Microsoft is expected to announce a next-generation Xbox at E3 next month, but ahead of that, the company today launched the brand-new all-digital Xbox One S. Called the Xbox One S All-Digital Edition, the system costs $250 / £200 / AU $350, and it’s available anywhere you buy consoles. 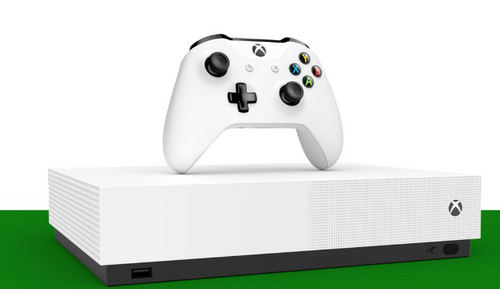 The new model is the same form factor and size, but it has no disc drive. It sports a 1 TB hard drive and it comes with three games: Forza Horizon 3, Minecraft, and Sea of Thieves.

The release of the Xbox One S All-Digital Edition is noteworthy because it’s the first major home console to offer a disc-free version. Microsoft announced the system in April, at which time it said «consumer appetite for digital content and experiences are stronger today than ever before.»

Indeed. Just today, Electronic Arts reported that a whopping 49 percent of all of its full-game sales on PlayStation 4 and Xbox One over the past 12 months were digital. The share of digital sales at other publishers is expected to be rising as well.

The new all-digital Xbox One S is not replacing the standard Xbox One S or the Xbox One X, both of which have disc drives. The new digital version is only an option for people who want it.

The lack of a disc drive means the console doesn’t support DVDs or Blu-ray discs, but Microsoft says people can still experience 4K content through Netflix, Amazon, and other destinations. The form factor is the same, and the all-digital Xbox One has the same functionality as the standard Xbox One S. It just cannot play game discs or disc-based media.

Looking ahead, Microsoft is expected to announce one or multiple next-generation Xbox consoles at E3 2019 in June.