In the free section for Week 6, players will need to find the highest elevations on the island, visit three specific landmarks, and then take out opponents in Lazy Lagoon or Frosty Flight. If you’ve got the Battle Pass, you’ll need to search where the knife points on the treasure map loading screen, land at five different locations as part of a multi-stage challenge, use throwable items, and bring down enemies with either the Flint-Knock Pistol or Boom Bow. Take a look at the full list of challenges below. 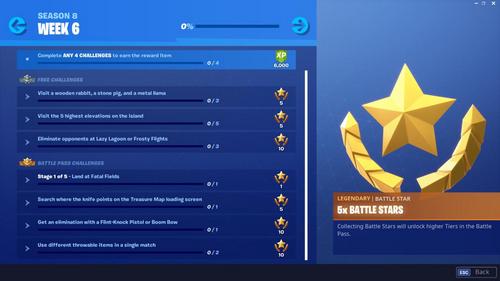 The final challenge in the Battle Pass section for Week 6 makes good use of one of the newer additions to Fortnite. The Boom Bow was introduced in Fortnite’s 8.20 content update, and uses shotgun shells that explode on impact. Holding fire increases draw strength and will also up the arrow’s speed and the damage. Save the World mode gets its own new weapon as well, the Cannonade Launcher.

Once you’re done with Week 6’s challenges, you may want to finish up any incomplete challenges from previous weeks. Use our Season 8 Challenge Guide for help with that and you’ll be well on your way to unlocking all the cool new Fortnite skins and other Battle Pass rewards from Season 8.

How Halo: Reach Will Be Added To Halo: MCC And What It Costs