Respawn has launched the latest update for Apex Legends, and it’s a hefty one. This patch introduced the game’s first season, so it covers more than just the usual tweaks-although those are a big part, with the much-anticipated hit box changes being implemented. The new update also adds both the Battle Pass and new character, Octane. Here’s everything new and different in the patch notes. 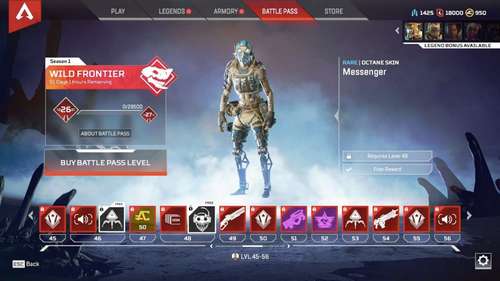 Respawn released the patch notes for the Season 1: Wild Frontier update on the Apex Legends subreddit, and they give a little more detail on a few things, like how long Octane’s abilities last, and included a bunch of quality-of-live improvements that are now part of the game as well. Arguably the biggest is the hit box change, though. According to Respawn, the hit boxes for Gibraltar, Caustic, and Pathfinder have been changed «to better align with their shapes.» These were announced previously, and the adjustment to character hit boxes should make big characters like Gibraltar, Caustic, and Pathfinder a lot more viable on the battlefield.

Hit boxes are invisible shapes assigned to characters that register when they’ve been hit-if you shoot a character but your bullet lands outside their hit box (hitting, say, a hand or a piece of clothing), the hit doesn’t count and the character takes no damage. Caustic and Gibraltar, being the biggest characters in Apex Legends, had the biggest hit boxes, but they were also apparently not quite in line with the character players see on screen. The same is true of the robot Pathfinder, whose hit box previously extended into places that didn’t look like they should count as a hit, such as the space between his metal legs. The change should make all three characters a little tougher to hit, and therefore, more players will be likely to choose them going forward.

The new update also throws in a number of bug fixes, like patching a spot in Gibraltar’s shield that wasn’t blocking bullets and fixing a problem in which Pathfinder’s zip line wouldn’t deploy if players used it while jumping. There are a bunch of other quality-of-life changes that should make playing the game a bit easier for some people, like the ability to swap the functions of the left and right bumpers on controllers.

Another notable addition in this patch is the new ability to report people you suspect might be cheating. Players using hacks have been a problem for Apex on PC, and Respawn said in its patch notes it has banned just shy of 500,000 players for cheating. That’s a pretty big number, but considering Respawn says 50 million people have downloaded the game, there might still be a long way to go in cleaning up the cheater problem.

Finally, another aspect of note is improved crash reporting. PC crashes are still more commonplace than many would like, and this update aims to improve the way reports are generated. It also makes it easy for you to decide whether to share this report with Respawn and that there isn’t any personal data being included when you do.

You can read the full patch notes below. The update-and accompanying new content, include Octane skins-is now live on PS4, Xbox One, and PC.

We’ve got some fixes in this patch that will improve stability on PC but we know there are still issues out there we need to address. We also added crash reporting so we can better understand how to tackle the issues we haven’t solved yet and address future ones.

Apex Legends will now detect Razer Chroma peripherals and supported devices will now play animated colors that react to things you do in the game! Some examples:

The Best PS4 Deals From The US PlayStation Store Right Now