Today at Day 2 of the Final Fantasy Fan Festival in Tokyo, Square Enix made a series of announcements about Final Fantasy XIV Online, including the start-date for the game’s crossover event with Final Fantasy XV. 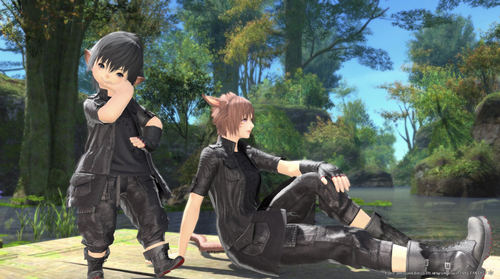 The crossover event, which was announced previously, is called A Nocturne For Heroes, and it begins April 16. This news was confirmed during a behind-the-scenes «Letter From the Producer» event featuring producer Naoki Yoshida. The event brings a number of Final Fantasy XV gear and items to FFXIV, including the game’s first-ever four-player mount. You guessed it, the mount is the Regalia, which is the car the main characters drive in FFXV. The other items include FFXV-themed gear and a hairstyle from the game.

In other news, Square Enix confirmed that Final Fantasy XIV patch 4.56, which is called «A Requiem for Heroes Part 2,» will launch very soon-it’s due out Tuesday, March 26. Coming after that is Patch 4.57, which adds the new World Visit system, and it’s launching on April 23.

You can see a full schedule of important dates in the graphic below, which covers all the big proceedings leading up to the release of Shadowbringers on July 2 (or June 28 with Early Access):

Yoshida and main scenario writer/world lore creator Banri Oda answered a series of fan questions during the panel covering a range of topics. You can re-watch the panel here on Twitch.

Fan Fest Day 1 yesterday brought a lot of big news as well, including the next race for Shadowbringers, a new raid, more screenshots, and a fresh trailer-get all the details here.

Keep checking back with GameSpot for more from Fan Fest today and Monday, including a gallery of some of the best cosplay we’ve seen. Disclosure: Square Enix paid for GameSpot’s flight to Tokyo and accomodations.