Fortnite is now in Week 10 of Season 8 and we’re quickly approaching the end of the season. Before we get there, however, there are Battle Stars to be earned. You’ll need these to level up the Battle Pass and get some of the cool cosmetics, so if you’ve got your eyes on a particular item you should make it a point of doing this week’s challenges and finishing up any existing ones from previous weeks.

In Week 10, players will need to launch themselves through three flaming hoops using a cannon (guide here), complete a multi-stage harvesting challenge, and then take out enemies in either Tilted Towers or at The Block.

If you’ve spent V-Bucks on a premium version of the Battle Pass, there are a few extra challenges to do. The first of these asks you to deal damage using rifles. Once that’s done, you’ll also need to find the map signpost in Junk Junction and follow it to the treasure (guide here). Volcano Vents are also back this week, and you’ll need to deal damage within 10 seconds of landing after using one. The final challenge in the premium Battle Pass section asks you to simply take out a couple of enemies from closer than 5m away. Take a look at the full list of challenges below. 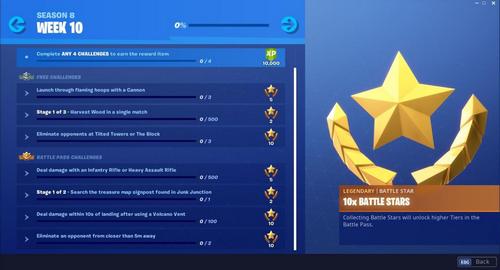