As is custom when a season of Fortnite approaches its conclusion, Epic Games held a one-time world event that gave people in the right place at the right time the opportunity to see something cool happen on the island. Except, this time it didn’t go off without a hitch, and in response Epic has offered those who encountered a problem a make-good gift. 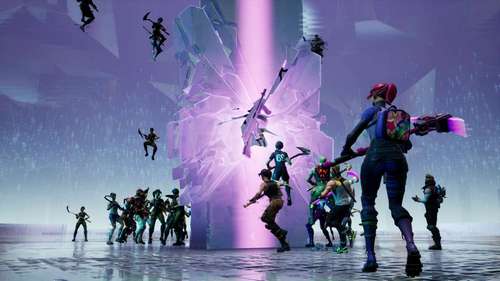 On May 4, players gathered around Loot Lake for an event called the «Unvaulting.» As the name implies, the mysterious vault at the center of the location opened up and Fortnite players jumped in. Inside they were faced with a number of pillars that represented different weapons and items. Players effectively chose which of these to free from the vault by collectively striking down a pillar using their pickaxes. The liberated item was the Tommy Gun, and once freed everyone was launched back onto the island.

After being returned from the vault, players got to witness the volcano that appeared for Season 8 erupt and destroy Tilted Towers, effectively reshaping the island and laying the groundwork for Season 9.

That’s how it should have gone, and for many that’s what they saw. However, a large contingent of players that gathered for the event encountered issues and were not able to see the event unfold as intended. Epic Games has acknowledged the issue and said, «We apologize to those who were unable to witness the event and place their vote.»

To make up for the snag, those that were in the Unvaulting playlist at the right time will be given the Arcana Glider free of charge. If you already purchased the Arcana Glider using V-Bucks, you will be refunded the 1200 V-Bucks.

Fortnite Season 8 is now its 10th week and the season is coming to a close very soon. But before you start thinking about what’s next, we recommend wrapping up the season’s challenges as quickly as possible. Once the transition to Season 9 happens, older challenges will no longer be available and rewards attached to Season 8’s Battle Pass will also expire. If you want any of those, act fast.

We’ve got a breakdown of and guides for Season 8, Week 10’s challenges, and if you’re playing catch-up on challenges from earlier than that, head over to our full Fortnite Season 8 challenge guide, which will get you through all the trickiest challenges for the season in no time.

League of Legends Champions Korea Spring Playoffs 2019: What to Know